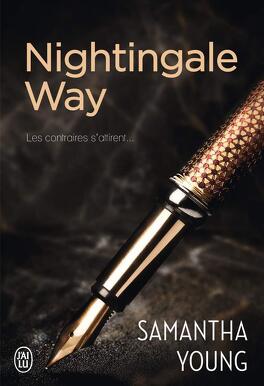 I stared at the bright pink thong draped across the hand railing on the landing I shared with the new neighbor I had yet to meet. My first semi-introduction to him was last night when my work was ground to a halt by the high-pitched squealing coming from next door.

My neighbor’s girlfriend was loud during sex.

Although frustrating, there was nothing I could do but wait for it to end. It took so long (I had to give them points for stamina), it was time for me to go to sleep and I’d gotten hardly any editing done.

Aghast at the thought of my clean and well-maintained stairwell suddenly turning into the set for Shameless, I could do nothing but stare at the offending item in horror.

The sound of my neighbor’s door opening jerked my attention from the thong to his door.

Stepping out of the doorway, phone to his ear, was an exceptionally tall man. My eyes roamed over the broad shoulders and muscular biceps and stopped on the black tattoo that took up a good part of his right forearm. It looked Celtic in design and appeared to be a sword with a semicircle arching over it and connecting on either side of the hilt.

“Talk to Dad,” the man murmured, drawing my gaze from his tattoo to his face. “Whatever you decide, I’m on board.”

His dark hair was close-shaven, and he was sporting heavy scruff that only made his rugged features that much more so. His large build and the scruff were too much in my opinion. I preferred my men leaner, clean-cut, and far less intimidating.

Suddenly I found myself trapped in his gaze as he looked up and spotted me.

I froze, flustered by the heat that suffused my cheeks under his perusal. He had the most extraordinary eyes I’d ever seen. They were clear and light. Beautiful, unusual violet eyes rimmed with black lashes. Those eyes softened his looks somewhat.

I found myself released from his gaze as he dragged it down my body and back up again. From there I received a polite nod that made me bristle. Perhaps my reaction had something to do with how dismissive he was. Altogether irritated and not at all good at handling it, I glanced back at the thong and bit my lip. I couldn’t have underwear drying on my landing.

I looked back at him as he continued his conversation. “Excuse me,” I said quietly, annoyed, wanting to interrupt but still somehow too well mannered to do it forcefully.

Still, my quiet words brought his gaze back to me, and he frowned. “Shannon, I’ll call you back… Aye… ’Bye, sweetheart.” He lowered his phone from his ear and slipped it into his pocket. “Can I help you?”

I stuck out my hand and formally introduced myself. “I’m Miss Grace Farquhar.” I pointed to my door with my other hand. “Your neighbor.”

Lips pressed together in a hard line, he slipped his large hand into mine and engulfed it. A shiver rippled across my shoulders, and I immediately regretted offering my hand to him. “Nice to meet you, Miss Grace Farquhar.”

“Hmm, quite,” I murmured, tugging my hand back and trying not to appear as flustered as I felt. “And you are?”

He was making fun of me. I ignored it. “Well, Mr. MacLeod.” I tried for a pleasant tone, but I could feel the thong glaring at me from the hand railing and fueling my annoyance. “I would greatly appreciate it if your girlfriend would desist from air-drying her unmentionables in the public stairwell.” I pointed a finger at the thong, not attempting to hide my distaste.

Logan stared at the thong. “Shit,” he murmured.

“Logan!” a female voice shouted from inside his flat. “Do you fancy going out for breakfast?” The voice was suddenly accompanied by a body.

A young woman stepped out onto the landing wearing nothing but a man’s shirt. It was buttoned just below the ribbon on her bra, revealing a rather impressive cleavage. Everything about the woman was curvy and feminine, and her short but trim legs were tan, her long hair was dyed a shiny platinum blond, and she had what appeared to be mile-long fake eyelashes expertly affixed to her eyes.

She was my opposite in every possible way, and I suddenly realized why Logan MacLeod had dismissed me upon sight.

“What’s going on?” She blinked her wide baby-blue eyes up at Logan.

Logan sighed. “Did you put your thong out here to dry?”

She nodded. “The air’s drier out here than in the bathroom. I thought it would dry quicker.”

I watched the two of them, fascinated by my neighbor’s growing annoyance and his girlfriend’s obliviousness in the face of it.