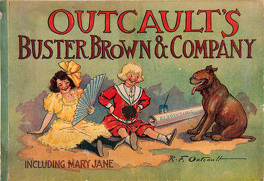 Buster Brown, his sister Mary Jane, and his dog Tige, an American Pit Bull Terrier, were well known to the American public in the early 20th century. Tige is thought to be the first talking pet to appear in American comics, and, like that of many of his successors, his speech goes unnoticed by adults.

Buster Brown is a young city-dwelling boy with wealthy parents. He is disturbingly pretty (contrast him to The Yellow Kid, or Frederick Opper's creations), but his actions belie his looks. He is a practical joker who might dress in a girl's outfit and have her wear his clothes, break a window with his slingshot, or play a prank on a neighbor. The trick or transgression is discovered and he is punished, usually by being spanked by his mother, but it is unclear if he ever repents. Many strips end with Buster delivering a self-justifying moral which has little or nothing to do with his crime. For example, a strip from May 31, 1903, shows him giving Tige a soda from a drugstore soda fountain. The drink splashes, not only the front of his own clothes, but the skirts of a woman's splendid dress. Horrified by his clumsy misadventure, Buster's mother takes him home and flogs him with a stick. In the last panel the boy has written a message beginning, "Resolved! That druggists are legalized robbers; they sell you soda and candy to make you ill, then they sell you medicine to make you worse."