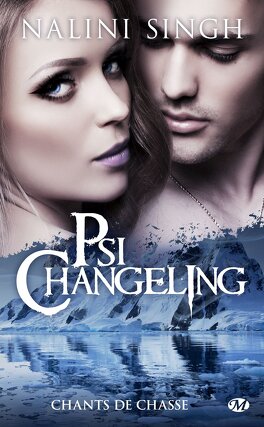 — On a déjà une guérisseuse.

Tamsyn looked across the Pack Circle to the men and women who stood on the other side. Lachlan, their alpha, his hair going the white of wisdom and age, was saying something to Lucas, who was barely fifteen but carried the scent of a future alpha. The past and the future side by side. One day soon, Lucas would lead them. Everyone knew that. The boy had been drenched in blood, his parents murdered in front of his eyes. But he would lead. It didn't matter that even if they waited a decade, he'd still be far too young.

Just like Tamsyn was too young at nineteen to be the senior healer for the DarkRiver leopard pack. Her mentor had been Lucas's mother, Shayla. The attack on Lucas's family had not only stolen their healer, it had left DarkRiver in a state of constant alert. That didn't mean they had given up. No, they were quietly building their strength until the day they could destroy the ShadowWalkers--the pack that had murdered their own.

She knew Nate would be one of those who went after the rogue pack when the time came. He stood tall and strong beside Lachlan, his concentration on whatever it was they were discussing. At twenty-nine years of age, he was one of the pack's top soldiers and would soon be a sentinel, assuming Cian's position when the older man retired from active duty. The sentinels were the pack's first line of defense. They were the strongest, most intelligent, and most dangerous predators of them all.

Startled, she looked away from Nate and into Lysa's bright green eyes. "I only got in an hour ago." Even now, she didn't quite believe she was home--the six months she'd spent at the teaching hospital in New York had been the hardest of her life.

"So the course is over?"

"Yes. That part of it anyway." She could finish the rest of her medical training in nearby San Francisco. Most changeling healers relied on their inborn gifts, but Tamsyn had made the decision to study conventional medicine as well. It was one more way to compensate for her inexperience, for the healing gifts that hadn't yet matured to full strength. She refused to allow her youth to disadvantage her pack.

"Nothing went wrong while I was away?" She'd hated leaving DarkRiver under someone else's care, though she fully trusted the healer who'd stepped in to hold the fort during her absence. "Maria?"

"She left this morning. Itching to get back home exactly like you." Lysa smiled. "It was nice of Maria's pack to lend her to us and she was great, but damn I'm glad to have you back."

Tamsyn returned her friend's fierce hug. "I'm glad to be back."

Lysa set her free. "Go on. I know you're wanting to catch up with Nate."

"No." She glanced over her shoulder. "He's busy with Lachlan."

"The man's your mate, girl. You can drag him away."

Mate. The word made her heart skip as it had since the day she'd turned fifteen. That was when the mating instinct had awakened, when she'd realized she was one of the lucky ones--she'd been born into the same pack as her mate, had known him since childhood. "It's not official yet."

Lysa rolled her eyes. "As if that matters. Everyone knows you two are meant for each other."

Maybe, but they were nowhere near to consummating the relationship. Nate was determined she get the chance to explore her freedom before settling down. What she had never been able to make him see was that he was her freedom. She didn't want to be apart from him. But Nate was stronger than her. And at ten years her senior, he was used to giving orders and having them followed.

"I should freshen up," she said, dragging her eyes away from him a second time. "I just dropped off my bags before coming here." Searching for him.

"All right. I'll see you after you've settled in." Lysa smiled. "I have to go talk to Lachlan about something."

Nodding good-bye, Tamsyn began to move away from the large clearing ringed by trees that was the pack's outdoor meeting place.

Nate had seen Tammy arrive, waited for her to come to him. And now she was walking away. "Excuse me," he said to Lachlan, no longer caring about the discussion at hand. Some Psy named Solias King was apparently making what he thought were discreet inquiries about DarkRiver's territorial reach and ability to defend itself. Lachlan was fairly certain the man wanted to steal their land.

"This is important--oh." The DarkRiver alpha looked up and followed the path of Nate's gaze. His frown turned into a grin. "No wonder you're distracted. Guess we won't be seeing you for a while. We'll have to track this idiot down ourselves."

Good-natured laughter followed Nate out of the Pack Circle as he tracked his mate's scent through the trees. He caught her in under a minute. The second his palm clasped the back of her neck, she froze. "Nathan."

Her skin was delicate under his hand and he was very aware of how easily he could damage her. With her hair swept up into a long tail, her neck appeared even more vulnerable. He rubbed his thumb over the softness of her. "When did you get back?"

It was now five thirty and winter-dark. "Where have you been?" The leopard who was his other half didn't like that she hadn't come to him first.

She turned her head, eyes narrowed. "It's not like you left a note as to your whereabouts."

His beast calmed. She'd gone looking for him. Gentling his hold, he slid his hand to the side of her neck and pulled her to him. She came but her body was stiff against his. "What's the matter?"

"Juanita was very happy to tell me where you were."

He heard the jealousy. "She's a friend and a fellow soldier."

"She was also your lover."

The beast wanted to growl. "Who told you that?"

"I'm a decade younger than you," she retorted. "Of course you've had women. I don't need anyone to paint me a sign."

The jagged edge of anger turned his next words razor-sharp. "I haven't taken a lover since your fifteenth birthday." He was a healthy leopard male in his prime. Sexual hunger did not sit well with him. But neither did cheating on his mate. "And if someone's telling you different, I'll tear out their throat."

She blinked. "No one's telling me different." Her voice was husky. "But I don't like knowing you've had other women in your bed, that they've touched you, pleasured you."

Her bluntness shocked him. Tamsyn did not talk to him like that. "What exactly did you do in New York?" The possessive fury that hit him was close to feral, a harsh thing with claws and teeth.

Her mouth dropped open. "I don't believe this!" Breaking his hold with a quick move of her head--a move he'd taught her--she faced him, hands on her hips. "You think I would--" She gave a little scream. "You know what, if I had, whose fault would that be?"

He folded his arms to keep them from hauling her back against his chest and proving to his beast that she still belonged to him. "Tamsyn."

"No. I've had it up to here!" She jerked the edge of her hand to below her chin. "All the other females my age are taking lovers left, right, and center, and the only thing I get is frustration!"

Her raw need was simple truth. Newly mature females were very sexual, their scent intoxicating to the young males. Then there was the fact that the mating heat had shifted Tammy's natural hunger into higher gear. He could taste the woman musk of her, the lush ripeness just waiting to be bitten into--it was an exhilarating blend, and one he alone had the right to crave. Even the idea of any other male lusting after her pushed his temperature into explosive range. "If I take you," he said quietly, "it'll be for life."

"I know that! And I accept it. I need to belong to you--in every way."

His cock wanted to take her up on it. But she was nineteen . She didn't understand what it was she was committing to. He wasn't some kitten who'd follow her around with his tongue hanging out like the young males did with the females. He'd take her and he'd keep her. Sexually, he was far more mature than she was, and a leopard-changeling's sexual needs only grew more intense with time. "You don't know what you're asking."

"Dammit Nate, I'm sick of needing you so much I can't sleep." Her hands fisted by her sides, caramel-colored eyes rich with heat. "I'm sick of stroking myself to sleep."

"We are not your parents," she spit back.

He went silent. "I told you to never bring up my parents again."

"Why not?" She was trembling. "They're the reason you're being so stupid. Just because your mother was miserable after deciding to take a permanent partner at age eighteen doesn't mean I will be."

His mother had been more than miserable. "She committed suicide." If not in truth, then in effect. Her drinking had escalated to such an extent that even her tough changeling physiology hadn't been able to repair the damage.

"We are not your parents!" Tamsyn repeated, her voice breaking on the last word. "You're my mate . And I'm yours. Your mother and father didn't have that connection."

No, his parents had fallen in love the old-fashioned way, without being driven by the mating instincts of the leopard. It happened like that sometimes. Though mating wasn't uncommon, not every changeling found his or her true mate, the one with whom they could bond on a level that was almost psychic. "Mating will demand more from you than a non bond relationship ever would," he told her, cognizant of the terrifying animal fury of his hunger for her. "I don't want you walking into that before you're ready."

"And you're the one who decides if and when I'm ready?"

"I'm older and more experienced." She had years to go before she caught up.

She seemed to be gritting her teeth. "Fine! Enjoy yourself in your perfect little world where everything goes according to your plans. Don't blame me if I get sick of waiting for you!" She turned and began to stalk through the trees.

"Tamsyn." He used the tone of voice that made even the rowdiest juvenile stop and pay attention.

"What the hell?" Striding after her, he caught up just in time to see her clothes disintegrate off her body as she shifted into leopard form.

He froze, stunned as always by the beauty of her. Her pelt was glossy, the dark rosettes defined luxuriantly against the gold. Suddenly, she looked over her shoulder and gave him a look that could only be described as haughty. Her eyes were green-gold, not caramel, in this form, but they were very definitely all female.

He growled at the implied challenge. She snapped her teeth in response and took off. He almost went after her--his claws were already out by the time he brought himself back under control. If he ran her down in his current state...well, she wouldn't be complaining about stroking herself to sleep again.

Now his mind was so full of images of soft feminine flesh and long stroking fingers that he was in danger of bursting out of his pants. "Shit." Turning in the opposite direction from her, he ran toward a nearby waterfall. An ice cold bath was exactly what he needed to knock some sense into his head.