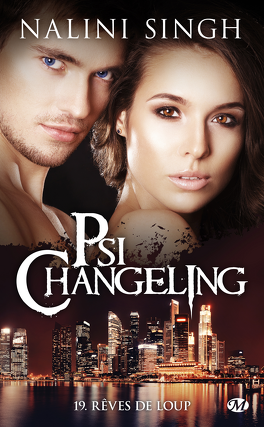 “Is your healer nearby?” he asked, interrupting the conversation with no care whatsoever.

“No.” A scowl aimed at him, her eyes that luminous gold, fascinating and dangerous. “I’ll have him look at it later. Just slather that goop in there on it.”

He knew she was referring to a numbing gel that would also protect the injured area. Gloving up before he retrieved the tube, he took care to be gentle as he spread the gel over the wound.

The heat of her body pulsed against him, almost as if the predator that lived under her skin was testing his mettle. The BlackEdge wolves weren’t exactly known for being sweet or compliant. He’d looked them up in the squad’s files and found the notation: Dangerous if provoked. Do not underestimate.

Despite the odd itch in his palm from when she’d offered him her hand, he kept his touch businesslike. It took effort. That initial contact had shoved sensation through him in a savage punch his brain hadn’t been able to process. Perhaps because that had been the closest he’d been to another person for a long, long time.

After realizing physical torture had no effect on Ethan, Ming had relied on vicious mental chains and on the pitch black of a room without light. Ethan had lived alone in the dark for a long time, so long that he’d forgotten the sun. It had seared his eyes when he’d seen it again after an eternity.

He’d also forgotten what it was to have skin-to-skin contact with another living being, forgotten that people burned hot . . . and he had never known that a woman’s skin could be so soft. Even when the woman was more dangerous than an Arrow. Selenka’s claws weren’t for show. She could’ve gutted him before he could react.

Ending his contact with her caused a physical reaction, his power crackling in his veins and his muscles tensing, but her wound was now coated with the gel. It looked no less red, but the pain should’ve already begun to dull. The thought did nothing for the strain knotting his body—because she was still hurt. And he had helped cause that hurt.

Ethan’s jaw clenched as he forced himself to move away from her.

Changeling soldiers had taken both assailants from the hall while he’d been doing first aid, and medics called in from a nearby hospital were checking on the collapsed. Aden had also appeared in the hall, no doubt alerted by one of the Arrows who’d been outside during Ethan’s blast.

Ethan? The mental signature of the current leader of the squad was cool and controlled.

It was also a voice to which Ethan would respond; he’d made that decision when he first saw Aden and realized the other man was close to him in age. Logic alone told him there was no way Aden Kai could’ve ever been one of Ming’s pet torturers.

Aden had told Ethan other relevant facts about the changes in the squad, but Ethan had wanted only one thing: the names of the men and women who’d come inside that pitch-dark room and tried to break a boy who wouldn’t speak. Even in the gray, that knowledge had had meaning to him.

As did the fact that Aden had kept his promise and found Ethan the data.

From the list of seven names, only Ming LeBon remained alive. As squad intel had confirmed the former Councilor was being stealthily hunted by an American pack of wolves who appeared to want to crush his empire before they tore him to pieces, Ethan had laid down his blades for the time being.

That Ming LeBon, a man used to power, would lose it all before he died, that had struck him as ice-cold justice. Should the wolves fail in their quest, however, Ethan would be waiting in the shadows with a blade of light that would cut the former Councilor to tiny pieces that Ethan would then feed to feral hogs.

The ferocity and specificity of the thought caught him unawares but only for an instant. He embraced the black fire of it, deciding vengeance was better with emotion as he replied to Aden, I saw the threat. I neutralized it. Going down on one knee, he put his used glove in a biohazard destruction bag, then riffled through the rest of the first-aid kit. No fatal harm.

Report understood. Aden’s voice held a depth Ethan had never before felt but that suddenly made him certain he was missing the full meaning of that outwardly straightforward statement. What is your status?

No, Ethan. Aden waited until Ethan glanced up; the squad leader’s dark eyes met his across the room. Are you injured?

Ethan realized that was tactical information, too. No. Ming’s silent weapon remained as functional as it had ever been—not whole, Ethan hadn’t been that since he was six years old, but functional. Do you need me to neutralize another threat?

No. I just wanted to make sure you hadn’t been hurt. More foreign depth in Aden’s words, tones Ethan couldn’t comprehend. We’re family, Ethan. And family looks after one another.

Rising with an antiseptic seal in hand, he opened it out with care; the seal would protect Selenka’s wound from infection until she could get to her healer. Well aware by now that she was conscious of every action in her vicinity, he offered no verbal warning.

She didn’t stiffen when he began to press the transparent seal into place around the wound, so the numbing gel had to be working. Once the wound was sealed, he picked up her torn T-shirt but realized at once that she couldn’t put it back on without stretching and possibly exacerbating her wound. Picking up the jacket instead, he held it out. She slipped one arm, then the other into it without looking back.

The sound of her doing up the zipper was fast and crisp.

“The numbing effect will fade within the hour,” he said. “You should get to your healer by then.”

Both Selenka and the bear alpha stared at him.

Selenka raised an eyebrow. “You always interrupt big, scary changelings who could eat you in one bite, zaichik?”

Ethan was fluent in Russian, but he still wasn’t sure if he was translating the last word correctly. Because he thought it meant “little rabbit.” Possibly, it was a predator–to–assumed-to-be-prey interaction.

Shrugging that aside, he said. “If necessary.” Ethan knew fear was an emotion, but it wasn’t one with which he had any familiarity. “I believe, given my muscle mass, I’d be fairly unappetizing in any case.”

The bear laughed, big and loud and with a warmth that crashed against Ethan like a wave in a near-physical way, but Selenka narrowed her eyes.

“You should watch this one, Selenka,” the bear said, before he turned to go to where his lieutenants were stirring awake.

“Should I watch you?” Selenka’s question held a wolf’s growl . . . alongside a glint in the eye that didn’t appear to be aggressive at all. “Are you a threat?”

“Yes.” Lying to the only person in his entire life who had saved him was out of the question. “We should talk after this.”

Selenka closed her fingers around his chin, the contact light even as she sliced out her claws. The glint was gone, to be replaced by a deadly ruthlessness. “If you are a true threat to me or mine, I will tear out your throat and walk away with your blood on my claws—and in my mouth.” She brushed one claw over his lips. “But if you’re not . . . well, zaichik, then we’ll play.”