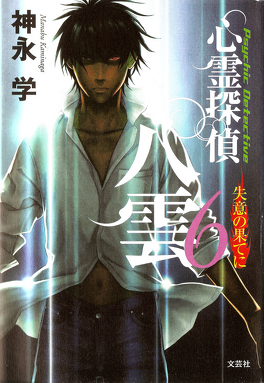 Volume 6 - To the Limits of Despair

'Absolute evil.' Nanase Miyuki has been arrested and things appear to be peaceful for a moment, when Miyuki, who is in detention, calls Gotou and Ishii to her and declares – I will kill Saitou Isshin from inside the detention house… For Miyuki, who is imprisoned, it is a physically impossible prior notice of murder. However, for some reason, her eyes are filled with confidence. Is it really possible!? Gotou succumbs to doubt and decides to protect Isshin. Miyuki's true intention in aiming for Yakumo's uncle is –

Isshin was stabbed at the temple!? How did the culprit accomplish this under guard? Beginning with Ishii, everyone becomes suspicious, while Yakumo confronts Nanase Miyuki, who gave a declaration for murder, in the detention house. Meanwhile, at the hospital Isshin is in, a ghost of a girl is rumoured to wander the halls!?? When the many intertwined incidents become one point, Yakumo and Haruka head towards a heavy sadness as an important decision approaches… The conclusion to the series’ greatest tragedy.