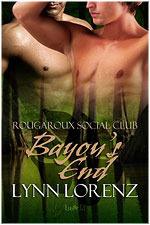 Peter Graham’s pack threw him out when they discovered he was gay. Ever since then, Peter’s been adrift. Denying his wolf and being the boy toy of a string of older men is all Peter knows. But when his lover brings another man to their bed, and that man abuses Peter, there’s nothing left for Peter but to run, all the way back to St. Jerome, a small town on the edge of the bayou, where he once painted. He meets Billy Boudreaux, a deputy and a werewolf, and discovers the town’s secret -- the Rougaroux wolf pack. They have a gay man as their alpha who is mated to a gay man. To Peter this looks like home, but he’s not the type of man either Billy or the pack would want.

Not everyone in the pack is happy about the inclusion of gay werewolves, and Peter joining the pack is seen by some as a threat. Can Billy keep his mate safe until he claims Peter in front of the pack?