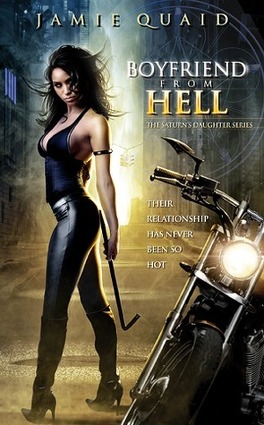 They say justice is blind. But Justine isn’t.Justine (Tina) Clancy is just an ordinary law student with a faulty arrest record, a part-time job in Baltimore’s radioactive Zone, and a family secret so bizarre even she doesn’t believe it. That is, until in a fit of fury she damns her boyfriend to hell—and it’s exactly where he ends up.

Much to her surprise, Tina is apparently one of Saturn’s daughters, with the power to wield vigilante justice. But poor Max didn’t deserve to go up in flames, even if he did almost run her over with her own car. Tina’s convinced someone cut the brakes—and now a relentless nemesis is stalking her through the Zone’s back alleys, where buildings glow, statues move, and chemical waste exposure comes with interesting consequences. Tina’s usually a loner, but now she needs a posse like no other: a shape-shifting kitten, an invisible thief, a biker gang, a snake-charming private detective, a well-meaning cop, and her sleazy, sexy boss. But in between freeing Max from hell, saving her own neck, and solving a mystery that threatens the Zone and her newfound friends, how is she ever going to study for finals?