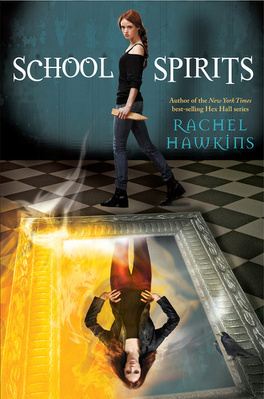 Fifteen-year-old Izzy Brannick was trained to fight monsters. For centuries, her family has hunted magical creatures. But when Izzy’s older sister vanishes without a trace while on a job, Izzy's mom decides they need to take a break.

Izzy and her mom move to a new town, but they soon discover it’s not as normal as it appears. A series of hauntings has been plaguing the local high school, and Izzy is determined to prove her worth and investigate. But assuming the guise of an average teenager is easier said than done. For a tough girl who's always been on her own, it’s strange to suddenly make friends and maybe even have a crush.

Can Izzy trust her new friends to help find the secret behind the hauntings before more people get hurt?

[/spoiler]-I was trying not to be that tacky about it, but yes, I was asking if you had...or if you have a boyfriend.

My heart was pounding fast now. This time I couldn't tell myself he was being friendly, or that this was "just Dex." Boys don't ask if you have a boyfriend unless they are interested in you.

And then something occurred to me. I could tell him I did. Invent some long distance guy, someone I e-mailed and skyped with. And that would be that, Dex and I could be friends, nothing more. He might feel a little disappointed, and maybe he would pull back a little.

Just the tough of that hurt. I hadn't know Dex very long, but I liked him. Genuinely. Hanging out with Romy was fun, but it wasn't the same as the time I spent with Dex. I had been quiet too long.

-So that's a yes, then? he asked, his voice every bit as light as mine had been moments ago. But I heard the hurt creeping around the edges.

Turning around, I let the beam of my flashlight fall on the floor.

-No, I don't have a boyfriend.

I tough I had seen everyone of Dex's smiles. The goofy one, the ironic one, the delighted one. But the grin that broke across his face was a whole new specimen: the sexy one.

He breathed, and then he was crossing the cave and pulling me to him.[spoiler]