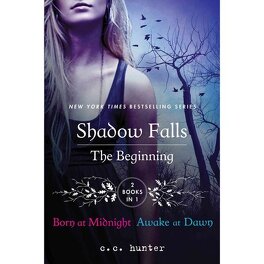 Kylie Galen has had a lot of crap tossed in her lap lately. Her parents are getting a divorce for who the heck knows why. Her boyfriend broke up with her because she wouldn’t put out. And her grandmother died because . . . well, older people do that. But now, Kylie’s acquired a stalker and she hasn’t a clue what he wants or how to get rid of him . . . and she really wants to get rid of him because apparently she’s the only one who sees him. Thinking she may be losing it, her parents send her off to see a psychologist who gets Kylie sent to Shadow Falls Camp. Kylie and her parents think it’s a camp for troubled teens.

Kylie’s surrounded by vampires, werewolves, fairies, witches and shapeshifters. And if she believes what they tell her, she’s one of them. They’re just not sure exactly how she fits in. As Kylie struggles to cope with the realization that these creatures even exist, and the fact that she might not be human, she’s got two hot guys, a werewolf and a half-fairy vying for her attention. And they can just keep vying. Kylie’s determined that before she lets her heart loose on love, she needs to unearth the truth. What does the ghost want? Who can and can’t she trust? And most of all . . . What is she?

Kylie Galen thought her life was a mess before she went to Shadow Falls Camp. However, now that she’s discovered she’s not human, the problems presenting themselves are anything but normal.

She’s determined to uncover the answer to her supernatural heritage, but with a ghost insisting someone Kylie loves is about to die, her newly developed sixth sense telling her someone is watching her and a rogue vampire on a murdering rampage, Kylie’s quest for answers is on hold. As if her life isn’t difficult enough, just when she’s about to give her heart to Derek, he starts pulling away. When Lucas comes back, Kylie feels more conflicted than ever. Kylie’s weekend with her mom should have been just the break Kylie needs, but it turns out to be her breaking point. Discovering her heritage may not ever matter if she doesn’t survive.