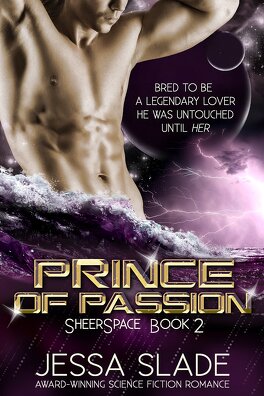 Bred to be a legendary lover, he was untouched...until her

When mercenary raiders targeted the empathic crystals that imbue the legendary l’auraly lovers with extraordinary sensual prowess, Icere, the last male l’auralyo, helped destroy the crystals. Rather than let the source of uninhibited pleasure be corrupted into a mind-controlling drug, he allowed his passionate destiny to remain forever unfulfilled. Now, Icere channels his fury into revenge. Tracking the raiders through the interstellar sheerways to a watery world infamous for its aphrodisiac liqueur, he finds a queen—as adrift and alone as he—forced for years into a fate she never desired.

Saya-Rynn inherited duty, command and control from her cruel grandfather and fought to transform her dangerous planet into a paradise for her people—but the price was literally a poison that runs through her veins. Though she feels as ancient as the seas, she finds herself awash in the hot male potency of the young Icere. Still, she resists the chance for indulgence she thinks has passed by her. But when the raiders strike again, Rynn must embrace her troubled legacy, and Icere will find his place as a lover and a fighter. Together, the reluctant ruler and the deposed prince of passion find common purpose, combating the mysterious entity seeking to rule the sheerways, and claim a love as bright as the infinite stars.