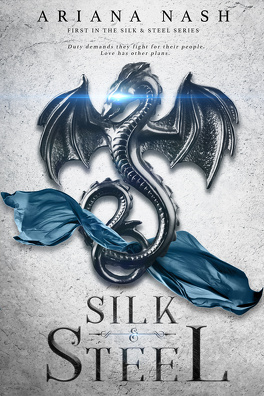 The Dragon Queen’s reign is one of darkness and death. Humans have vanished under the rubble of their world and if the queen has her way, elves will be next.

Eroan, one of the last elven assassins, lives for one purpose: kill the queen.

He would have succeeded if not for her last line of defense: Prince Lysander. Now, captured and forced into the queen’s harem, Eroan sees another opportunity. Why kill just the queen when he can kill them all? It would be simple, if not for the troubled and alluring prince. A warrior, a killer, and something else…, something Eroan finds himself inexplicably drawn to.

Trapped in a life he despises, Lysander knows his time is running out.

If the queen doesn’t kill him for his failures, her enemies will. There’s nothing left to live for, until an elf assassin almost kills him. A stubborn, prideful, fool of an elf who doesn’t know when to quit. An elf who sparks a violent, forbidden desire in Lysander.

If Lysander can’t save himself, maybe he can save the elf and maybe, just maybe… one stubborn elf will be enough to bring down the queen before she kills them all.

Duty demands they fight for their people. Love has other plans.

This series is a DARK FANTASY intended for mature readers. While Silk & Steel is a love story, it is not for everyone. It is not categorized on Amazon, and not sold as m/m romance. It DOES feature a strong m/m LOVE STORY that develops over three books.

Silk & Steel features a gay dragon shifter, a bisexual elf, and adult themes. There is triggering content that some readers may find distressing, including implied incest, abuse, violence, dubious consent, and on-page sex. None of these instances are gratuitous. There is heterosexual sex and gay sex. The intense and star-crossed relationship between the two male leads develops over three books.

My name is Eroan Ilanea,” he breathed, setting his name free. “I was forged in the fires of Ifreann, quenched in Alumn’s maelstrom, for a single purpose... to kill the Dragon Queen.”