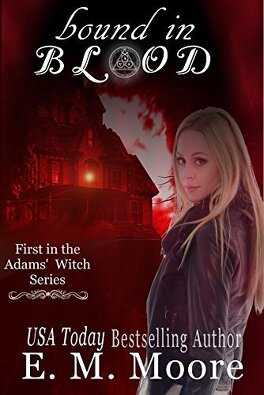 A curse to kill them all...

On a quest to unearth more about her long dead father, eighteen-year old Sarah Perkins ends up in quiet Adams, Virginia chasing a lead. She didn't know her presence there would trigger the Adams' Witch curse.

Things are in motion that can't be stopped. For centuries, the immortal Mother Shipton has claimed one innocent life after another. Now, Sarah finds herself on a race against time and magic to unravel the mysteries of the past before time runs out.

Can Sarah escape the curse before it takes her life? Or will the Adams' witch claim another victim?

Bound In Blood is a fantastic YA Urban Fantasy filled with magic and mystery. If you like the work of Alyson Noel, Kami Garcia or P.C. Cast then you won't want to miss this! Join E. M Moore in her newest series The Adams' Witch!

Nine-hundred miles of I-95 taught me that Virginia was as much like Florida as flip-flops were like heels. Not necessarily better in any way, just different. Gone were the palm trees and sandy beaches I’d spent my entire life around. In their place? Pine trees. A lot of them.

Outside the SUV, headlights touched on the dark, foggy back-road the GPS told me to turn down a few miles back. Houses were few and far between. Actual signs of life? Even more sparse. Woods, fields, and scurry animals seemed to be a hit in Virginia, though.

I tried to hold a picture in my mind of what would happen when I finally met her. Imagine the different scenarios that could play out. I’d had two days of driving to prepare for this after all and yet, I still had no idea what I was going to say.

Now that I was so close, I could let myself believe that this was actually going to happen. My hands shook. Insane thought after insane thought swirled around inside as if I sailed the deep, dark waters of the Atlantic in a rowboat minus the motion sickness pills.

Finally, the GPS’s tinny, indifferent voice announced, “You have reached your destination.” I managed to turn into the short, circular driveway, grip stumbling along the wheel.

The house rose up like a statue in front of me. Big, foreign, a secluded shadow in a clump of old maples. The roofs peaked at different heights and different angles, and the windows, some oval, some rectangular, were adorned with intricate woodwork. The house may have been beautiful a hundred, maybe even fifty years ago, but even in the dark, I could see cracked white paint and broken molding.

One of the first floor windows held the only sign of life. Streams of different colors played out on the paned glass, deep blues and subdued reds. While I watched, a bright white flashed erratically before dimming to black. I crouched over the wheel to get a better look. An old TV set, the kind framed in wood, sat along the far wall of the room.