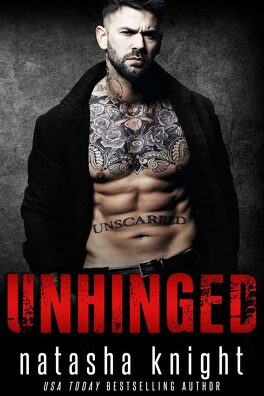 But he’s back. Risen, like Lazarus, from the dead. And he’s dark. Darker than he was before. More dangerous. Unhinged. A scarred, tattooed savage.

The way he looks at me should terrify me, but I’m drawn to him, to his intensity. Consumed by it. By him. Even though I know if I’m not careful, his obsession will destroy me.

I should have died that night two years ago. My mistake cost my men their lives. It should have cost me mine. But I survived. And the day I learned she did too, I made it my mission to find her.

I sought her out. Tracked her. Shadowed her every move. I’ve been inside her house. Eaten her food. Drank her liquor. I’ve stood beside her bed and watched her sleep.

She has so many secrets, and I know one of them. It’s the one where our pasts collided. The one that destroyed me.

And it’s the reason I’ve come for her.

Finding people who don’t want to be found has always been one of my specialties. It’s what got me into special ops.

It’s also what got me killed.

Well, almost got me killed.

It isn’t quite pitch black when I step out of my SUV and onto the street. Her street. The full moon shines bright overhead, making the clouds appear silvery, making them cast shadows as they skim past. I don’t duck into those shadows, though. I take my time walking to her house. Don’t bother hiding. I stroll, in fact—if a guy my size can stroll—right up to 13 Rattlesnake Valley Lane.

Her garden is small, but neat, not a single weed in the lush green grass. The walkway swept clean. Perfect. No cracks in the concrete. It’s just like her, actually. Perfect—on the outside. The inside’s where the damage is.

It’s a warm night, even for Denver, but she has all the windows open. Sheer curtains blow gently, but the breeze is getting stronger. It carries a storm on its heels. An omen.

When I reach her door, I slip my key out of my pocket. I made a copy a few weeks ago. She hasn’t noticed I’ve been coming and going for that long. But she’s never been home for my visits. Not yet, at least. Not until tonight.

I turn the doorknob and open the front door. I know the exact point when it will creak, so I make sure I’m in before it does. I don’t bother locking it behind me. Locks never keep those they intend to keep out, out. It’s naïve to think otherwise.

By now, I’ve memorized the layout of the small house. It’s another of my talents. I see everything, every single detail most people don’t even notice. It’s what saved my life the night I was meant to die.

The living room is picked up, and utterly impersonal. It’s like no one lives here. I wonder if she rented the place furnished because it doesn’t look like what I imagine she’d like. This stuff is all too big, too rustic. Too secondhand.

I almost nick my shin in the same spot I have twice before, but move just in time as I make my way toward her bedroom. She sleeps with the door open. I’m guessing it’s for ventilation. I wonder why she doesn’t run the AC, but maybe it’s because of her background, where she’s from. She’s lived in the desert. Grown up in it. Maybe to her, this is cool.

As I get closer, I can see her soft, feminine shape lying beneath the single white sheet on the bed. She’s on her side, face to the window. Long, dark hair is strewn across her pillow. She’s got one arm over top of the sheet and I recognize the scar where a bullet skimmed her skin two years ago. She’d been that close to dying. If I hadn’t tackled her to the ground when I had, she would have died.

And maybe six others would have lived because of it.

I can’t go there.

A cloud crosses the moon, casting a shadow over her face as I approach. It’s gone as quickly as it came though, and a moment later, I’m looking down at her, at Eve El-Amin. And even though I’ve been tailing her for weeks, memorizing every detail of her new life, being this close to her, it does something to me. Being near her has always been difficult, dangerous, but this time, it’s more than that. Or at least it’s different. It stirs up all those old emotions—anger the predominant one—but something else, too. Something dark and twisted inside me.

A thing that wants what it wants.

I close my eyes momentarily, quashing that last part. Shoving it deep down into my gut. It’s no use. Not here. Not now. Because too much is at stake to let that side take over.

It’s like asking the question of why. It’s no use trying to understand why. Did she know that night was a trap? Did she know she was sending us into a massacre? Why would she do that? Why, when every single man who died that night would have laid down his life to protect hers?

I feel my chest tightening, along with my jaw, my fists. Eve mutters something in her sleep. I’m not worried she’ll wake. My heart doesn’t even skip a beat when she rolls onto her back. That’s how far gone I am. That’s how little I care if she does open her eyes and sees me standing in her bedroom, looming over her as she sleeps.

And that’s what makes me dangerous. Makes this mission—my private vendetta—so fucking fragile.

I need to fucking care.

I need to get my head out of my ass and focus on why I’m here.

If she sees me now, it’ll fuck up the grand entrance I have planned. For weeks, I’ve been going through her house. Drinking her liquor. Eating her food. Leaving empty containers on the kitchen counter. Moving her mail. Little shit that makes her think she’s not paying attention or forgetting. Unnerving her. Making her look over her shoulder.

That little shit is changing tomorrow.

I look down at her face. She’s pretty. Always was. She hasn’t changed much in two years, which surprises me. I would have thought sending six men to their deaths would have taken its toll.

But then again, you’d have to have a conscience for that.

Her hair’s longer. I bet the thick waves she used to tie in a ponytail reach the middle of her back. Her olive skin is pale for the time of year, still smooth, still perfect, just like her tiny nose, those lush, plump lips. I can see a little glimpse of white teeth behind those lying lips.

I crouch down. I’m so close, I can hear her breathe.

I inhale, taking in her scent, remembering it. Memorizing it. Filing it away as my cock stirs.

“Sleep well tonight, Eve El-Amin,” I whisper, and I can’t resist touching her, pushing a wisp of soft, jet black hair off her face. “Because come tomorrow, your days are numbered and sleep will become a thing of the past.”