The Art of How to train your Dragon 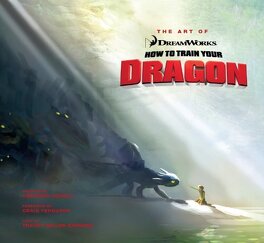 Featuring more than 350 pieces of development artwork that includes early character designs, story sketches, and concept paintings never before released by the studio, The Art of How to Train Your Dragon offers a stunning view of DreamWorks Animation's film about an unlikely alliance between a young Viking and a deadly dragon, inspired by the original book by Cressida Cowell.

The Art of How to Train Your Dragon presents the insights of the filmmakers who crafted this high-flying cinematic adventure and takes the audience on a visual tour of the Viking and dragon worlds that is an enthralling - but far less treacherous - as one would experience living among fire-breathing creatures with a boisterous Viking tribe.

The reader will be intrigued by page after page of beautifully realized illustrations that show how this remarkable movie about the Viking world, "where only the strong can belong," mixed with the dragon world with its "fiery furies," was conceived in its full glory. There are also behind-the-scenes section on the bold cinematic techniques used in creating this strikingly original animated movie. With an exclusive preface by Cressida Crowell and forward by Craig Ferguson, How to Train Your Dragon will be a delight for all movie and animation lovers as well as dragon and Viking fans.

The Art of How to train your Dragon