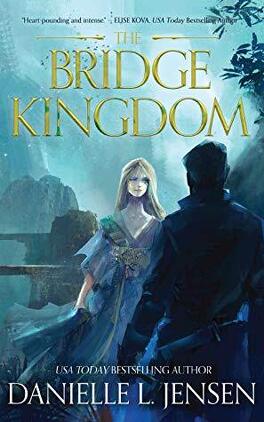 What if you fell in love with the one person you'd sworn to destroy?

Lara has only one thought for her husband on their wedding day: I will bring your kingdom to its knees. A princess trained from childhood to be a lethal spy, Lara knows that the Bridge Kingdom represents both legendary evil - and legendary promise. The only route through a storm-ravaged world, the Bridge Kingdom controls all trade and travel between lands, allowing its ruler to enrich himself and deprive his enemies, including Lara's homeland. So when she is sent as a bride under the guise of fulfilling a treaty of peace, Lara is prepared to do whatever it takes to fracture the defenses of the impenetrable Bridge Kingdom.

But as she infiltrates her new home - a lush paradise surrounded by tempest seas - and comes to know her new husband, Aren, Lara begins to question where the true evil resides. Around her, she sees a kingdom fighting for survival, and in Aren, a man fiercely protective of his people. As her mission drives her to deeper understanding of the fight to possess the bridge, Lara finds the simmering attraction between her and Aren impossible to ignore.

Her goal nearly within reach, Lara will have to decide her own fate: Will she be the destroyer of a king or the savior of her people?

“The only thing I’m due for is a bath before dinner. Dragging your ass back from Southwatch was sweaty business. You’re heavier than you look.” Lara’s cheeks flamed. “That said, if you are inclined to do the same, you are welcome to go first. Given you haven’t seen a wash in three days, you probably need it more than I do.” She stared at him, at a loss for words. “But, if you’re only out here to admire the . . . foliage, perhaps you might grant me a modicum of privacy.” He gave her a lazy smile. “Or not. I’m not shy.” That was what he expected. For her to be dutiful little Maridrinian wife and attend to his needs, whether she wanted to or not. It was what he expected, she thought, watching him watch her, but it wasn’t what he wanted. Thoughts flicked through her mind one after another. Of the clothes he wore, the colors intended to blend into jungle around them. The scars, which had clearly come from battle. The bow he’d held in his hand, ready to use at a heartbeat’s notice. This man is a hunter, she decided. And what he wants is a chase. She was more than happy to give him one. Especially if it meant delaying a certain inevitability that she was desperate to avoid.

“Then you can wait.” She smiled inwardly at the surprise that lit up his eyes. Unbuckling her belt, she dropped the weapons next to the edge of the pool, then turned her back on the king, pushing the straps of her dress off as she did. Peeling the damp silk from her body, Lara kicked the garment aside, feeling his eyes on her as she stepped into the pool, with only her hair hanging to the small of her back to conceal her naked flesh. It was scorching hot. A temperature that one needed to ease into, slowly, but Lara gritted her teeth and waded down the steps, only turning when the swirling water covered her breasts. The king stared at her. She gave him a serene smile.

“I’ll let you know when I’m finished.” He opened his mouth as though to argue, then shook his head once and turned. Lara allowed him to take three steps before calling out, “Your Majesty.” The King of Ithicana turned to regard her, not quite hiding the anticipation in his expression. Lara let her head fall back so that the waterfall poured over her hair. “Please leave me the soap. I’m afraid I forgot to bring any out with me.” She hesitated, then added, “The towel, too.” The bar landed in the water next to her with a splash. Lara opened her eyes in time to watch him remove the towel from his waist and toss it on a rock, his feet smacking against the path as he strode naked back to his room. Biting the insides of her cheeks, Lara struggled to contain her grin. This man might be a hunter. But he was mistaken if he believed she was prey.