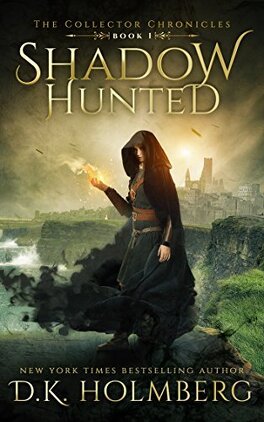 Carthenne Rel is born of shadow magic. Gifted with the power to control the flame that burns within her. A master strategist. All will be tested by the mysterious Collector.

As she travels south, wanting to solidify her growing network, word of attacks in the south leads her to a distant city with a strange past. While searching for answers and attempting to establish a presence as she has in countless other cities, she finds power that rivals her own and a challenger who might be not only more powerful than her, but an even more cunning strategist.

Carth must save her friends—and the city—before the plan set in place by the Collector succeeds.

Carthenne Rel leaned over the bow of the ship as it sliced through the water, ignoring the salt as it sprayed up over the railings, inhaling deeply of warm air so different than that of her homeland. Sunlight glittered off the water, with the rippling waves seeming to sparkle. It was a sharp contrast to the dark-sailed vessel making its way toward them.

“What should we do?” Jenna asked.

She stood at the wheel of the Goth Spald, keeping them cutting through the waves. The ship was quick—once a smuggler’s vessel and now something quite different—and they could evade the oncoming ship if necessary, but Carth wanted to know more about the strange arrival. Everything they had learned had brought them here.

The square sails were enormous—much larger than a ship its size needed—and it cut through the sea nearly as quickly as the Spald. Holes cut into the hull looked as if they were meant for weapons—or for oars. It wasn’t a merchant ship—at least, it wasn’t anything like she’d ever seen.

“That will take us directly into its path,” Jenna said.

Carth glanced over at the raven-haired woman. “That’s the plan,” she said.

“Do you think we’ll have to fight?” There was an eagerness to the question, which Carth tried to ignore.

“Hopefully not. I’m still tired from the journey.” They had been sailing for several weeks, searching for information about why supply lines to the north had failed and why several of her ships had disappeared, but nothing in the northern part of the continent had provided any information. Then again, Carth hadn’t expected to learn anything there. Her own network—a group of women who had dubbed themselves the Binders—would have known were there something about that part of the world that could have been learned. The silence, which had been troubling, had been the reason Carth had needed to make this journey.

Carth looked over the others standing on the deck of the Spald. She had a crew of four, including Jenna, all of whom had been with her for months and all selected not so much for their sailing abilities as for their other talents. None were quite as talented as Carth, but each of them offered other skills that she needed during this journey.

“I didn’t think you needed so much rest,” Linsay said, approaching the railing and leaning forward. She had her chestnut hair pulled back into a thick braid and she wrinkled her nose as she stared at the oncoming ship. There wasn’t fear in her expression—none of the women feared a fight—but a distinct interest.

Carth suspected that Linsay in particular would be interested in the strange ship coming their way. She was the archaist among them and, in the few months she’d traveled with them, had demonstrated considerable skill in identifying the various items they discovered. With a ship like what came toward them, they might need Linsay’s knowledge.

“I don’t, but the last battle was only two days ago,” Jenna said.

“Two days where you’ve done nothing,” Linsay said. “You’re getting lazy on the sea.”

“Maybe the next time we face pirates, you could get involved.”

Linsay shook her head. “That’s not my area of expertise.”

“And what is your area of expertise?” Jenna asked.