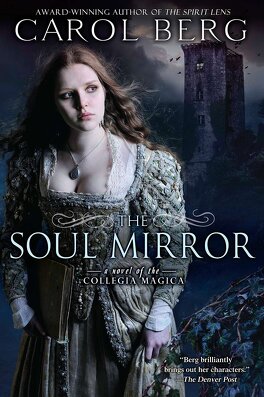 Anne de Vernase rejoices that she has no talent for magic. Her father's pursuit of depraved sorcery has left her family in ruins, and he remains at large, convicted of treason and murder by Anne's own testimony. Now, the tutors at Collegia Seravain inform her that her gifted younger sister has died in a magical accident. It seems but life's final mockery that cool, distant Portier de Savin-Duplais, the librarian turned royal prosecutor, arrives with the news that the king intends to barter her hand in marriage.

Anne recognizes that the summoning carries implications far beyond a bleak personal future - and they are all about magic. Merona, the royal city, is beset by plagues of rats and birds, and mysterious sinkholes that swallow light and collapse buildings. Whispers of hauntings and illicit necromancy swirl about the queen's volatile sorcerer. And a murder in the queen's inner circle convinces Anne that her sister's death was no accident. With no one to trust but a friend she cannot see, Anne takes up her sister's magical puzzle, plunging into the midst of a centuries-old rivalry and coming face-to-face with the most dangerous sorcerer in Sabria. His name is Dante.