The Dragonwall, Tome 1 : Talon the Black 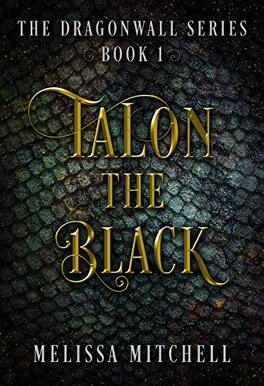 What would you do if a dragon fell from the sky? Claire Evans is a small-towner from Indiana faced with this exact situation. When a dragon crash-lands in her corn field, she goes gallivanting off to find it.

This incident triggers a chain of events that sweep our heroine into a complicated plot to destroy a kingdom. At the heart of it is a powerful sorcerer whose only desire is to bring about a past long forgotten, a past that favors those of magical blood and condemns those who are not worthy, a past that would result in the annihilation of peace and the deaths of many.

Claire finds herself thrust into an old fashioned world liken to those she's grown up reading about, one of fantasy and intrigue. There, she soon realizes that a lifetime of books hardly prepared her. She must face difficulties never before confronted, and in so doing, discover secrets about herself. All the while, there is one obstacle that ultimately stands in her way: The King of Dragonwall. And she needs him on her side if she is to succeed. Will such a thing be possible?

The King of Dragonwall is not like those before him. Troubled and temperamental, he is scarred by more than the events that shaped him. Worst of all, he is mateless. With no queen and no heir, his subjects are demanding he abandon tradition and marry into nobility. But with the rising threats upon his borders, goblin unrest to the east, and talk of an even darker terror to the north, he will soon have far greater problems than that of finding a wife.

**Modern meets medieval in this first installment of The Dragonwall Saga, which is full of magical creatures and adventure. In addition, there are a variety of interesting characters, and even a dose of romance.

The Dragonwall, Tome 1 : Talon the Black