The Ever Chace Chronicles, Tome 1 : Skin and Bones 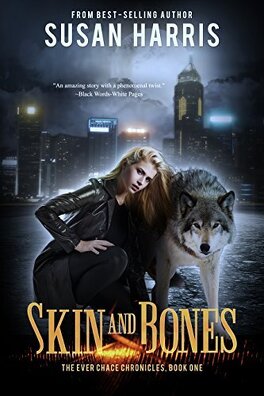 The Ever Chase Chronicles (2 livres)

Being human in a world filled with supernatural creatures can give a girl a complex. Dr. Ever Chace wants nothing more than to be able to stand out in this crazy place she calls home. When she’s asked to consult on a case where teens are being brutalized, she relishes the chance to make a difference by helping to stop a monster. But when she’s teamed up to work alongside a sexy shifter, she ends up with more than she bargained for.

Derek Doyle has been a member of the Paranormal Investigations Team since the monsters first revealed themselves to the world. Considering he believes it takes a monster to catch a monster, he’s definitely in the right place. As a lone wolf not used to letting many people in, he isn’t prepared for the effect his new partner, consultant Dr. Ever Chace, has on him.

With a murderer on the loose, Ever and Derek will have to put their attraction aside while the hunt continues. Easier said than done… right?

The Ever Chace Chronicles, Tome 1 : Skin and Bones

Melanie remained hunched on the comfy armchair, the room almost completely in darkness as she took in the exquisiteness of Caitlyn’s home. Trying to ignore the raw, gut-wrenching pain that racked her entire body, Melanie focused on the delicate furniture and fixings of the quaint little bungalow. Her new twenty-twenty vision meant she no longer needed her glasses, and it was a strange sensation to be without the wide-rimmed specs perched on her nose. A lush, apricot wall was adorned with artwork that she guessed was original. Caitlyn had been alive for a very long time; it figured she would have collected some stuff along the way. Hardwood floors complimented the room with little or no personal touches apart from the one wooden box atop an ornate, black iron fireplace.