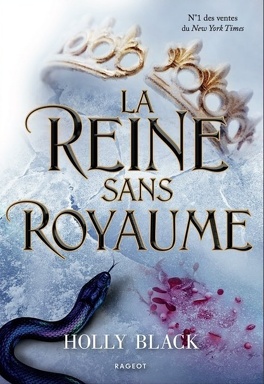 The Folk of the Air, Tome 3 : La Reine sans royaume

“Jude, you can't really think I don't know it's you. I knew you from the moment you walked into the brugh.”

Since I cannot imagine there is much in the human lands to interest you, I can only suppose your continued absence in Elfhame is due to me.

I urge you: Come be angry at a nearer distance.

"It was terrifying," he says, "watching you fall. I mean, you're generally terrifying, but I am unused to fearing for you. And then I was furious. I am not sure I have ever been that angry before."

"Mortals are fragile," I say.

"Not you " he says in a way that sounds a little like lament. "You never break."

“In my most wretched hours, I believe you will never come back.”

"Jude never loved Locke" my face feels hot, but my shame is an excellent cover to hide behind.

"She loved someone else. He is the one she'd want dead"

I am pleased to see Cardan flinch.

Not even responding to my missives is ridiculous and beneath you and I hate it.

"So you keep telling everyone," the Bomb says.

"But I am going to take out her stitches, and I don't think you want to watch that."

"I would," Cardan says, standing. "And perhaps one day I will." On the way out, his hand goes to my hair. A light touch, barely there, and then gone.

"Of course it was a trick. Wasn't that what you said in return ?"

"But that's what you do," Cardan says. "You trick people. Nicasia, Madoc, Balekin, Orlagh. Me. I thought you'd admire me a little for it that I could trick you. I thought you'd be angry, of course, but not quite like this."

I stare at him, openmouthed. "What?"

"Let me remind you that I didn't know you'd murdered my brother, the ambassador to the Undersea, until that very morning," he says. "My plans were made in haste. And perhaps I was a little annoyed. I thought it would pacify Queen Orlagh, at least until all promises were finalized in the treaty. By the time you guessed the answer, the negociations would be over. Think of it: I exile Jude Duarte to the mortal world. Until and unless she is pardoned by the crown." He pauses. "Pardoned by the crown. Meaning by the King of Faerie. Or its queen. You could have returned anytime you wanted."