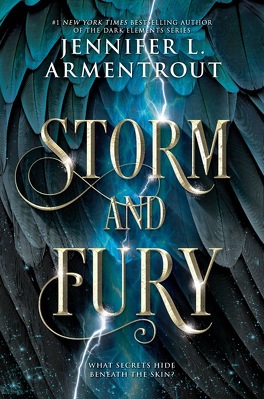 The Harbinger, Tome 1 : Storm and Fury

I closed my eyes.

My head jerked in his direction. “Excuse me?”

“I’m only asking, because I know he didn’t do that with Stacey. They fooled around, but they didn’t, you know, go next level.”

“How in the world do you know that?”

“Unfortunately, I’ve heard one too many conversations between her and Layla,” he replied dryly. “They share everything. So, did he? You know, go next level? Because if he did, then I’m over here talking out of my ass and I’m about to have a party, because trust me, no one wants to see Zayne move on more than me.”

Pressing my lips together, I shook my head. “No party.”

« I winced and squeezed my eyes shut as pain flared.

Thierry ordered, “And you. I need your clothes now.”

“I really don’t want to repeat myself. I need the clothes off you now. They must be destroyed.”

Oh, wow. I opened my eyes, because if he was going to disrobe, I was going to be just like Peanut. No shame. If I died from blood loss, at least I’d die getting to look at whatever was underneath that shirt. »

« Just because I was partially obscured by a curtain doesn’t mean I was snooping around.”

Zayne was only about a foot from me now, and I caught the scent of winter mint again. “Do you often find yourself partially obscured by curtains?”

I snapped my mouth shut and then took a deep, long breath. “Why are we talking about this?”

He lifted a shoulder and dropped it. “Because you’re claiming you’re not a snoop. I mean, maybe you spend your free time standing behind curtains all the time. What do I know?”

My eyes narrowed. “Oh, yeah, I actually do like hanging out behind curtains. I like how dusty they are.”

“Since I detect sarcasm, you’re basically admitting you were snooping.”

“I admitted no such thing.”

He dipped his chin. “Why not just admit it?”

I started to tell him there was nothing to admit, but I had been snooping. Obviously. I sighed. “We don’t get a lot of...visitors, so when I saw you guys arrive I was curious. I had no idea you would be talking about anything important.”

"But can you do me one favor?” he asked, and I nodded against his chest. “Can you stay away from Zayne?”

That I wasn’t expecting.

I pulled back and stared up at him. “Not that I’m expecting to become his next best friend forever or anything, but what’s the big deal?”