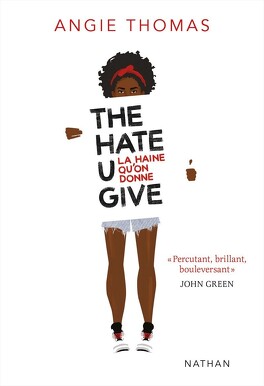 The Hate U Give - La haine qu'on donne

Once upon a time there was a hazel-eyed boy with dimples. I called him Khalil. The world called him a thug.

He lived, but not nearly long enough, and for the rest of my life I'll remember how he died.

Fairy tale ? No. But I'm not giving up on a better ending.

It would be easy to quit if it was just about me, Khalil, that night, and that cop. It's about way more than that though. It's about Seven. Sekani. Kenya. DeVante.

It's also about Oscar.

It's even about that little boy in 1955 who nobody recognized at first - Emmett.

The messed-up part ? There are so many more. Yet I don't think it'll change one day. How ? I don't know. When ? I definitely don't know. Why ? Because there will always be someone ready to fight. Maybe it's my turn.

Others are fighting too, even in the Garden, where sometimes it feels like there's not a lot worth fighting for. People are realizing and shouting and marching and demanding. They're not forgetting. I think that's the most part.

I'll never give up.

Brave doesn't mean you're not scared. It means you go on even though you're scared

Sometimes you can do everything right and things will still go wrong. The key is to never stop doing right.