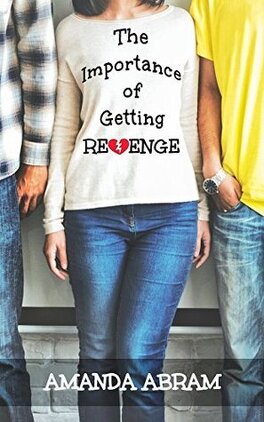 The Importance of Getting Revenge

With a chuckle, he dropped my waﬄe onto a clean plate and then sat down across from me at the table. “ 'Jerkface' ? Shouldn't we be saving all these terms of endearment for when Kylie and Jeﬀrey are around?”

With a huﬀ, I turned back to Trish. “Please tell your brother that if he doesn't give me my waﬄe back, I'm going to tell Kylie he's terrible in bed.”

I was pleased when Jase nearly choked on his mouthful of waﬄe at my words. Trish almost choked as well on her juice, but that was because she was laughing.

But then I thought, oh, what the hell. This was it. Kylie was watching, and I had assured Jase that we would go all out with our charade tonight, so I ﬁgured we might as well just get it all over with then and there, since it was already happening. Jase must have been thinking the same thing too because he was suddenly pressing his lips harder against mine, as he reached up and dug his ﬁngers into my hair, tilting my head, bringing my face closer to his to allow him more access.

When he took one step closer to me and my back was suddenly pressed up against the wall once more, that's when I knew things were getting a little out of hand. We weren't supposed to be going this far. I mean, that wasn't exactly the plan, was it? I couldn't remember if it was or not, because my brain had gone numb right along with my body.

I wasn't expecting that. “Why would you feel sorry for me?”

“Because.” There was no longer any trace of humor anywhere on his face. “That loser is the only boyfriend you've ever had and he's given you this false idea of what a real boyfriend is.”

“Come on, Trish, you are my total BFF. I cannot go to this party alone, I need you there. I mean, what if Jase ends up ditching me soon after we get there because some drunk, hot blonde starts coming on to him? I will be all by myself. I will have no ride home. I'll end up drunk, and probably sleeping with some guy I've never spoken to, whose name I will never know. And then I'll wind up pregnant.” I paused for a moment. “You'll be my kid's godmother, right?”

“You want me to take you home?”

I blinked up at Jase, who still had his hands on my shoulders, and shook my head. “Trish can drive me.”

“Are you kidding?” He let go of me and stepped back. “It would probably ruin her newly manicured nails. Let me take you. You are, after all, my girlfriend.”

I snorted as I made my way over to the passenger side of Jase’s car. “You know, we don’t need to pretend when there’s no one around to witness it.”

“Maybe I like to stay in character, even when the cameras aren’t rolling,” he said as we climbed into the car.

His demeanor suddenly softened and he sighed. “He has a new girlfriend every other week. Doesn’t that worry you? Doesn’t that make you wonder how long you’ll last?”

I blinked up at him in surprise. Was that concern I detected in his voice? “No, I’m not worried. What Jase and I have is special.” Fake-special, sure. But special nonetheless.

He studied my face for a moment before saying, “It’s just that after the whole Jeﬀrey thing, I’m inclined to hate any guy you bring over here. Even if that guy has an incredibly hot sister.”

I refrained from bursting out in laughter. “Aaron—”

“I mean,” he interjected, “do you have any idea how badly I want to punch that creep in the face every time he walks by with that new skank of his?”

He was talking about Jeﬀrey now, and he actually looked angry. My heart began to swell in my chest. My little brother was going into protective-brother mode.

“Well,” Mom said, “this is certainly wonderful news. I have to admit, I always hoped this day would come. How long have you two had feelings for one another?”

Resting my elbows on the table, I buried my face in my hands.

Jase sat up in his chair. “I can’t speak for Lexi here, but I know I’ve had these feelings the whole time she’s been with Jeﬀrey. It’s been a tortuous three years, let me tell you.”

“Oh trust me, he’s pretty good. He's been keeping a couple of mine for years.”

I glanced sideways at him with my eyebrows raised. “Jase Holloway has secrets? Do tell. I’ll bet I’m even better than Eric at keeping them.”

Jase snorted. “I don’t think you could handle my secrets.”

“Hey.” Jase took a step closer to me and, placing a gentle hand on my shoulder, he turned me so that I was facing him. “Cheer up, emo girl.” I couldn't help but giggle as he pulled me into a hug.

I fell into his arms willingly, burying my face in his chest. He smelled good. As good as Jeﬀrey always did, if not better. And he felt good too. Toned and strong. Like he could protect me from just about anything.

“You’ll get your revenge,” he murmured into my ear. “I’ll make sure of it.

“That you’re a player? Jase, you have had quite a few girlfriends during your high school run. I wouldn’t be surprised if you’ve broken a record of some kind.”

He chuckled then, though I could tell he wasn't all that amused. “Yeah, well, maybe there’s a reason why I’ve dated so many girls.”

“Yeah,” he said dryly, “that’s it. Anyway, I just wanted you to know about this. I mean, I wanted to make sure you were okay with it.” He studied me for a moment.

“Really? Because if you’re not—”