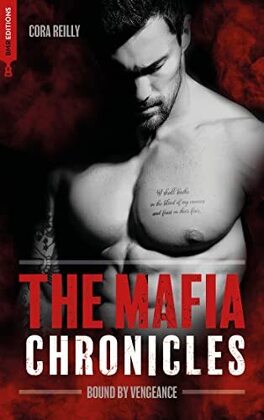 The alcohol was starting to relax me. It wasn’t surprising that so many people in our circles were alcoholics. This life could often only be tolerated drunk.

His head had to be an incredibly exciting place considering how much time he spent there.

‘I shall bathe in the blood of my enemies and feast on their fear.’

‘How could you lose yourself if you never had the chance to find yourself?’.

“I don’t know his real name. Nobody does. People call him “Growl” to his face, and The Bastard behind his back.”

A man of the shadows because nobody wanted him in the light.

I’d lost my way; the three glasses of Champagne I’d downed didn’t really help either. This house was a maze, obviously built to impress and intimidate, and not so much as a place to feel comfortable and actually live in. At least I could not imagine ever feeling comfortable in a place like this, but maybe the almost life-sized paintings of Falcone had something to do with it as well. His haunting eyes seemed to follow me wherever I went.

I fumbled for my mobile in my purse and pulled it out, but hesitated. How embarrassing would it be if I called Anastasia or Trish and told them I’d actually managed to lose my way while looking for the ladies room? They wouldn’t let me hear the end of it. The atmosphere between us had been strained since my dance with Cosimo anyway. No need to give them any more ammunition against me.

Not for the first time I wished Talia were here. We’d laugh about this together, and she’d tease me about it for a long time, but never out of malice or schadenfreude. She wouldn’t use it against me when talking to other people.

Talia jutted her chin out stubbornly but even from across the room I could see the hint of tears in her eyes. Again guilt flooded me but I stayed tethered next to the front door. Mother hesitated, as if she, too, realized how hurt Talia was. “Maybe next year you’ll be allowed to come along.” She made it sound as if it hadn’t been her decision to exclude Talia from the party. Though, to be honest, I really wasn’t sure if the Falcone’s would be too happy if people started bringing their younger children along, considering that Falcone wasn’t known for his patience or family sense. Even his own children were sent to boarding schools in Switzerland and England, so they didn’t grate on his nerves. At least, if one believed the rumors.

“Put on a coat,” Mother said. I grabbed one that wasn’t fur, which wasn’t an easy feat in Mother’s wardrobe, and followed Mother out of the house. I didn’t look back at Talia as I closed the door. Father was already waiting in the driver’s seat of the black Mercedes in our driveway. Behind it, another car with our bodyguards was parked. I wondered how it was for people who weren’t always followed.