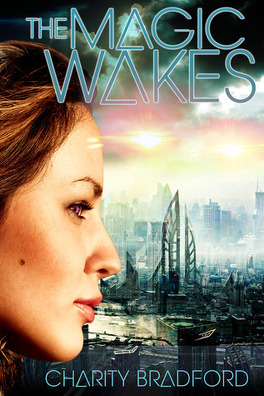 Since childhood, scientist Talia Zaryn has been haunted by recurring dreams, visions of an alien attack on her planet Sendek. Each time it ends abruptly with Talia’s death in the capital city Joharadin, a city that she has spent her life desperately avoiding. Talia keeps these dreams a secret, hoping they are nothing more than childish nightmares. But when she is unexpectedly transferred to Joharadin she is convinced that the conflict, and her own death, is at hand.

As Talia’s nightmares occur with increasing frequency, they reveal the imminent invasion of a half-dragon, half-human race called Dragumon, bent on the annihilation of her world.

In Sendek, magic is dead and science rules, forcing Talia to keep another secret, one that could cost her everything if it were known. Now, in order to save her planet, Talia must awaken the powers within her and rely at last on the magic that is her true inheritance.

“I fell in love with the story, the people, and the world. The hero is yummy and complex and the heroine tugs at your heart while still being tough and brave.” --Cami Checketts, author, Dying to Run

“I LOVE aliens. All aliens. My favorite Sci-Fi movies are the ones where aliens try to take over the world. And Magic Wakes is a perfect fit for me and my Geekery! Not only does it have aliens, but magic and connecting minds. How cool is that? How awesome is that?!!!” --Waiting on Wednesday

“The mix of science fiction (teleportation, multiple suns, and many more) and magic (mages, demons, dragons and Dragumon), made this hard to put down. The world building in this book is just amazing. Bradford truly has created her own unique blend of elements and it works very well. Highly recommended for sci-fi and fantasy fans alike.” --Offbeat Vagabond