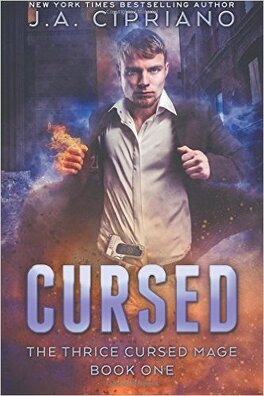 My name is Mac Brennan and that's the only thing I can remember about myself. Not why I woke up in a dumpster. Not why my right arm is as black as pitch and covered in glowing red tattoos, and certainly not why a vicious death cult is after me.

Actually, that last part isn't true. I know why the death cult is after me. It's because I saved that damned girl from them. I didn't know who she was at the time, but I'd have done it anyway. I just don't like it when girls get beat up, call me old fashioned.

Still, I can tell she's hiding something behind those devilish eyes, and if I want to find out what it is, I'll have to help her.

My name is Mac Brennan. I have no memory, and I'm a werewolf-hunting, hellfire-flinging version of Faust himself.

The sound of punishing hydraulics snapped me from sleep. My eyes shot open, but I couldn't see much of anything the closed lids of the dumpster. The stink of rotten eggs and festering meat filled my nostrils, turning my stomach as I struggled to find my bearing but succeeded only in burying myself further beneath gobs of slimy debris. I reached out, trying to claw my way through the plastic trash bags piled on top of me as the whole world shuddered up and to the left, covering me in dirty diapers, rotten tuna fish, and moody cheese.

My right hand lashed out with a mind of its own, trying to grip on the inside of the steel dumpster as it began to tilt, dousing the back of my neck in warm, sticky fluid that smelled of rancid beer. Bile rose up in my throat as my fingers scrapped against the paint- chipped metal, desperate for purchased that would no come.

The sound of a garbage truck's crushing hydraulics filled my ears, reverberating deep down in my gut as snake of fear twisted inside. I tried to scream, to cry out for them to stop as gravity, the bitch that she is, began pulling me toward my inevitable demise.

The lids beneath me fell open then, smacking against the metal side with a sound like a gunshot. The sudden glare of sunlight was nearly blinding, but it was the flash of trash-filled pit that threw me into a panic. I scrambled to grab onto something, anything that could arrest my fall before I tumbled into the gaping maw of the trash truck.

As my feet cleared the edge fo the dumpster and my finger slid off the metal, a wave of rancid, curdled milk crashed against my face, filling my nostrils with fetid goo and cutting off my air supply. Without thinking, I opened my mouth to suck in a breath before my lungs exploded. Milk spilled down my throat, and while I tried to curse in rage and horror, the only sound that came out was a hoarse, bubbling gag that would never be heard over the noise.

Even if I could have managed to cry out, there was no way for someone to hear me scream over the roar of the punishing hydraulics destined to compact me into pulp. Not that it mattered. If I survived the fall into the metal jaws below, I was going to be pretty damned dead about a second later when the automated press punched my teeth through my brain.

If the driver saw me now, it would probably be too late for him to stop his truck from killing me.