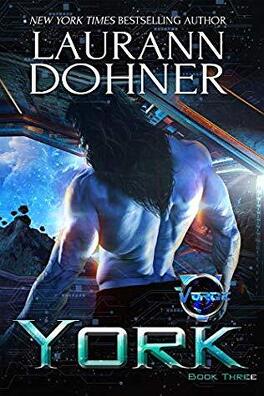 Watching his crewmates fall in love has left York craving a female of his own. That's how he ends up being matched to a Parri female through a service to find bond mates. He's excited at the prospect when he arrives on planet Relon. Until he actually meets her.

Betrayed by her government in a bid for alien technology, poverty-stricken human Sara is doomed to be a prince's sex toy, until she's rescued on a planet that doesn't take kindly to slavers. Suddenly free, she's an outcast on her new home, treated with distrust...by everyone except a gorgeous, kind, huge blue alien. Too bad he's getting married the next day. His future bond mate is a horrid, abusive woman, and Sara has a way to save them both - she'll convince York to bond with her instead.

Sara came to a stop behind York, tried to catch her breath, and then gently tapped on his broad back.

He turned, staring down at her. Surprise widened his eyes. “What are you doing here, Sara?”

“Yeppel, I was talking to you!” Nodo stepped around him, spotted Sara, and growled low in her throat.

Sara faced her. “His name is York.” She sounded it out for the blue bitch—twice. “It’s not hard to say. You could at least try to be polite enough to make the effort to learn it.” Her gaze locked with his. “Don’t bond to her, York. It will be a mistake.”

Nodo gasped loudly. “Get away from my bond mate!”

Sara ignored her, peering into York’s beautiful blue eyes. “You said some of your crew were bonded to humans. I know we don’t know each other well but I promise I’ll be nice to you. I won’t be anything like her.” She waved her hand at Nodo. “Pick me instead. I’ll be your mate.