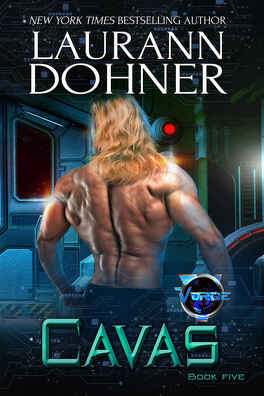 Career military man Cavas Vellar has joined his older brother, Cathian, aboard The Vorge for one purpose—to rescue their youngest littermate. Their father has resorted to having him kidnapped to hide one of his most vile secrets. They need to go down onto a planet full of criminals, find Crath, and rescue him. This mission is the most important one Cavas has ever led.

Jill was betrayed when Earth sold her into alien slavery. She owes her life to Cavas and the Vorge crew for taking her out of a cell and to their ship. When she learns why they were on that planet to begin with…she feels it's her duty to help them find their missing brother. Even if it means losing her recently gained freedom.

One determined alien on a mission. One woman who notices how sexy he is. This is their story.

Cavas crouched and lifted the blanket slightly, shocked by what he saw.

She was human. Cathian and his crew had mated to a few of them, and he could easily identify them by their tiny curved ears and delicate facial features. She lie curled in a ball on her side, facing him.

He reached out and brushed back her light red hair. It was a curly, snarled mess. A large bruise showed on one cheek. Her breathing was slow and even.

She didn’t stir at all. He carefully pulled the blanket off her upper body. He saw more bruising on her pale arms and growled softly. Someone had beaten her. Her delicate-looking wrists had damaged skin from restraints. The cuts were inflamed, red and infected. The dress she wore had rips in the front at the top, exposing one rounded breast, but it was covered by material, a thin white cup.

He shifted his position, braced his knee against the floor, and carefully rolled her onto her back. It was easy to slide his arms under her and lift, blanket and all. She didn’t weigh much and wasn’t a big female.