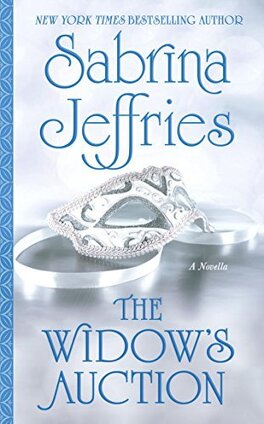 From Sabrina Jeffries—New York Times bestselling author of The Study of Seduction and The Art of Sinning—comes a sumptuous tale of a woman whose affection comes at a price...

Though Isobel Lamberton, the widowed Lady Kingsley, is confounded by her dealings with the obstinate Justin Antony, Lord Warbrooke, his commanding presence sparks something deep within her. But such romantic thoughts are for naught. For Justin’s political aspirations always come first. And Isobel’s own secret past could damage both of them permanently.

So when Isobel’s friend talks her into participating in a scandalous auction of masked widows at a gentleman’s club, she reluctantly agrees...and soon begins to relish being an object of desire. But none desire her more than Justin, who recognizes the outspoken Isobel in disguise and sets out to teach her a lesson worth far more than money...

Lord Warbrooke has bid on a masked widow whom he is sure is Lady Kingsley, meaning to teach her a lesson about such reckless behavior. But she thinks he bid on “Bella,” her alter ego. She is definitely in for a surprise. And so is he.

His gloved hand curved warmly over hers, making her breath catch in her throat. “Why were you nervous? Surely you’ve done this before.”

“That makes two of us,” he admitted as he led her toward the door, leaving the auctioneer behind.

A devilish mischief seized her. “I hardly believe that. You seemed to know precisely what you wanted and how to get it.”

“I should hope any man above the age of seventeen would.”

“Yes, but few men would pay a thousand pounds for it. I do hope I can make it worth your while.”

His dark smile curled her toes. “You’ve already made it worth my while. Whatever follows will just be icing on the cake.”

That threw her into a panic. Perhaps she’d underestimated the safety of her disguise. Oh, Lord, what if he’d already guessed who she was and was toying with her, waiting to see how far she would sink into depravity before he exposed her? “Wh-What do you mean?”

“I finally got to publicly humiliate a man I despise. That was easily worth a thousand pounds.”

“Oh.” Despite her relief that he hadn’t guessed her identity, his explanation disappointed her. “So this wasn’t about me at all. Any woman would have served. It was merely a battle between you and Lord Bradford.”

“Not quite.” His heated gaze made a slow circuit of her body. “I bid on you because I wanted you. And I wanted no one else to have you.” His possessive tone and the glitter in his eyes ought to send her fleeing. Instead, it melted her into a puddle.