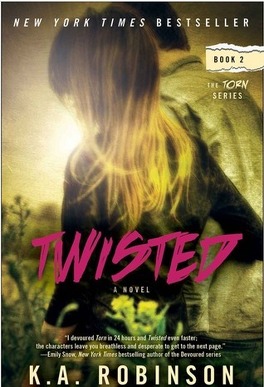 Chloe and Drake have found their happily ever after... Almost.

When Chloe's mother comes back into her life with a bang, it sets off a chain of events no one could have ever expected.

Everyone has their demons, and Chloe and Drake's hit them with a vengence.

Things are beginning to feel a bit... Twisted.

My ears were ringing. I looked up as Drake grabbed my arm; his lips were moving, but I couldn’t hear anything he was saying. She was here, in Drake’s home, my home now. I felt Drake pulling on my arm and I forced my legs to move as he led me to the couch. As he pushed me into the cushions, I caught sight of scarlet dripping slowly down my legs from several small cuts. That was funny; I could see the blood, but I didn’t feel any pain.

Drake kneeled in front of me, stroking my hair gently. “Chloe, can you hear me? Snap out of it baby,” he said in a soothing voice.

His voice snapped me out of whatever trance had taken over my body. I blinked rapidly and shook my head, trying to clear the ringing in my ears. It had settled to a dull hum in the background, and I breathed a sigh of relief that I could hear him.

“I’m here. I’m sorry, I don’t know what happened.” I glanced back at the front door. “Is she still here?”

He ran his hand across my cheek before standing. “Yeah, but I’m going to go get rid of her. Just stay here,” he said as he turned to the door.

“No, let her come in. Let her say what she has to and then she can get out.”

Drake looked back and forth between the door and me, doubt clouding his face.

“Really, I’m all right. Just let her in,” I said as I leaned back into the couch.

Frowning, he turned and walked back to the front door. I could hear both his voice and my mother’s, but I couldn’t make out what they were saying, only that they were angry.

A moment later, he stepped back into the room with my mother following closely behind him. I watched her as she took in our home with a look of disdain on her face. Andrea Richards, also known as my mother, had aged greatly since the last time we had seen each other. She looked at least ten years older than her thirty-six years. Wrinkles lined the corners of her mouth and eyes, and her skin looked gray and withered. Her hair was still as blond as mine, but it was unkempt and her roots were starting to gray. All in all, she was a perfect picture for the “after” portion of an anti-drug commercial.