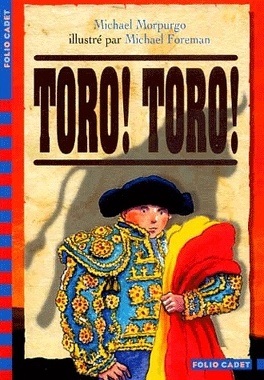 Stories about animals, stories about war, stories about important historical events… Three areas in which Michael Morpurgo is brilliant at. Toro! Toro! is another of his children’s novel, and one that is as moving and meaningful as many others.

With the title and the front cover already, the reader knows what the main themes will be: bulls, as said in the title, and war, as demonstrated by the aeroplanes and the ruins showed on the picture. We also understand that the story takes place in Spain, and although the front cover suggests the terrible events we are about to discover, everything starts quietly. Antonito live on a bull farm, where he helps his father look after a calf whose mother died, Paco. But when he discovers that his Paco is being prepared for the bullring, he makes the decision to save him, no matter the danger caused by the raising civil war.

By focusing the story on a child, an animal, and their extraordinary relationship, the author uses the same scheme as some of his previous books, such as War Horse and Shadow, but he knows how to bring in events that will make Toro! Toro! different and attractive to a young audience.

We are first drawn into Spanish culture, with bull fights and corrida. We get to know Antonito with enough details but not too many, in order not to distract the children. The reader will discover how the bull fights are organised at the same time as little Antonito, with descriptions and information to understand them properly.

We then understand the danger for Paco, but like Antonito, we forget another, greater danger: war. Here again, we are not given a whole lot of complicated details, but only just what is necessary for the young readers to understand what the civil war is about, who Franco is, and what is happening to Antonito’s village.

Antonito’s story is actually told by himself, but years later, when he is a grandfather. This 'story in a story' is a good point of view, as it allows a more adult glance than if it had only been little Antonito telling what happened. Also, it is probably a good book to read as a bedtime story, because the children will feel they are addressed to directly.

With Toro! Toro! Michael Morpurgo once more shows his talent for telling children stories. He gives them a good insight of important historical events without too much violence, with moving characters. The animals also add to the depth of the story, as does the unknown Spanish environment and culture. The pictures, designed by Michael Foreman, are simple and beautiful, and so is the writing style, which will probably arouse children’s attention from the age of five.