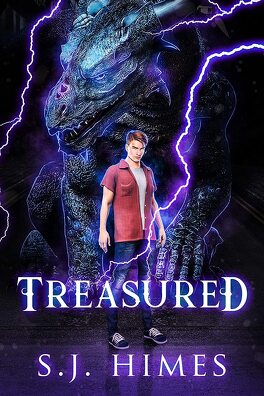 Needing employment to help his ailing mother, Alaric Keening gets a job as a billionaire dragon's clairvoyant. He never imagined his almost useless talent would ever become a marketable skill, and even worse--the sight of his new boss leaves him breathless. That was the worst, until the first day on the job, he finds himself nearly dying in the arms of his new boss.

Tarquin is a storm dragon, and he's been alone for centuries. Fleeing the Great Wars, he sacrificed his old territory and made a new home in Montreal, collecting companies to fill the void left by the loss of his hoard. Running an international company in the magical world means hiring a clairvoyant to protect his assets, and yet there is nothing to protect his heart when Alaric Keening walks into his office.

Between trying to keep Alaric alive and trying to find who's out to kill Tarquin, they can't deny the connection that goes far beyond that of a boss and his new employee--but that of a dragon and his treasure.

Treasured was previously published as the short story, A Caller From Montreal, in the Heart2Heart Charity Anthology Vol 4. It has been expanded and lightly edited with new content. Word count is 25,000 words.