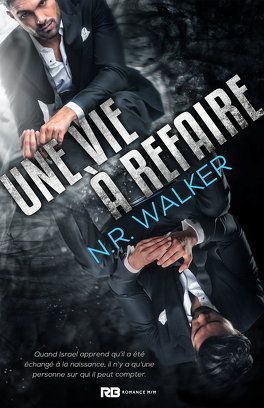 “Kitchen,” I mumbled, my voice sounding detached and weary. So fucking weary.

Sam rounded the corner, like he’d run the whole way, and stopped. He seemed to sag when he saw me―I must’ve looked like utter crap―and he walked slowly over to me before pulling me into a crushing hug.

Neither of us spoke for a moment. We didn’t need to. He’d been my best friend for years, and we were like brothers. Brother from another mother, we used to joke, and that now made me laugh, which in turn made me cry.

“Merrick and Julia Ingham?” a man with grey hair in a grey suit asked from an office doorway. My parents turned to face him, and he looked at me. “Israel Ingham?”

“Yes,” I replied, seemingly the only one in my family with manners.

We walked into his office to find two other people sitting at the side of a large mahogany desk. They were obviously legal people, witnesses or barristers. It was hard to tell. It took me a fraction of a second to figure out this meeting had nothing to do with fundraising.

He chewed on his bottom lip and seemed unsure of where to start. His complexion paled to match the grey of his hair, and I’d sat in on enough exec meetings to know this man was about to deliver news he’d rather not.

“There’s no easy way to say this,” he started. Then, like he remembered a spiel he’d mentally prepared earlier, he dropped a bombshell that would forever change the three of us.

“It has come to our attention, on the day of Israel’s birth, there was a mix up as a direct result of human error.” He steeled himself and looked at my parents. “Mr and Mrs Ingham, we believe the child you were given to raise as your own was not your biological child.”

We sat in silence as the man across from us explained it had only recently come to light, during an unfortunate circumstance where another woman had required blood testing. Her son had routine blood tests for his place of employment, where the mother noticed an inconsistency. The blood group stated differed from that of his birth records.

As it turned out, this child was born on the same morning of the same day in the same maternity ward as me. And in fact, we were the only two boys born on that day. Further investigation into my medical records from when I’d had my appendix removed as a young boy, in this very hospital, proved my blood type was a match to this other boy’s birth records, not mine.

Further DNA testing would be required, of course.

My mother stared at him, unblinking. My father, on the other hand, processed the man’s words for about twenty seconds before he erupted in accusations about responsibility and liability. The hospital’s legal team would have, without doubt, known who they were meeting before we walked in, which probably explained their nervousness.

As my father ranted and raved and Mr Dovich answered the best he could, my mind swirled. Disjointed, foggy, and disbelieving, my mind struggled to make sense of what I’d just learned. It was so absurd, yet somehow felt so real.

Could it be true? I mean, I looked nothing like my parents. Sure, I had pale skin like my mother and I was tall like my father, but that was where the similarities ended. My eyes were a dark, dark brown, different to my mother’s light brown, my father’s blue. My hair was darker. I had a different shaped face. I had a different build. Not only that, but I was nothing like my parents. Not in mannerisms, temperament, demeanour, or personality.

My heart was thumping hard in my chest, and my mother silently wiped a tear from the corner of her eye. I’d never seen my mother cry, ever. She normally had a look of profound disinterest on her face. And even now, for the very first time, I wasn’t sure whether it was tears of sadness or heartbreak, loss or betrayal, or whatever it was you were supposed to feel under circumstances such as these.

I’m pretty sure she cried because now it all made perfect sense. I wasn’t their failure, after all.