Warriors of the Mist, Tome 2 : Her Knight's Quest 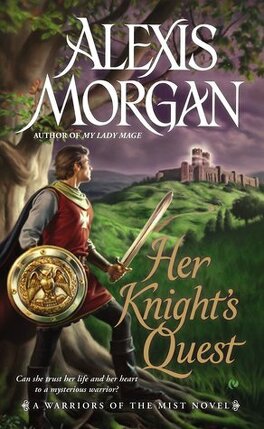 Warriors of the Mist (3 livres)

They are cursed by the gods, and war is their salvation. Love is their deliverance.

For centuries, five legendary warriors have braved their battles shoulder to shoulder. But now, they must divide and conquer as lone champions against evil.

Duncan, a scholar at heart, is drawn to an isolated abbey rumored to hold the answers to countering the terror unleashed by Duke Keirthan. Inside the cloistered walls lies the hidden collection of forbidden lore on dark magic. But the real key to the salvation Duncan seeks - both for the people of Agathia and his soul - is the abbess herself, Lady Lavinia. Hunted by the duke who seeks to harvest her powers, Lavinia knows Duncan wants to help her. But can she trust the tortured warrior with her secrets ?

In the end, it is only by joining forces that they can save not only those they are sworn to protect, but each other.

Warriors of the Mist, Tome 2 : Her Knight's Quest

The mirror-smooth surface shattered, sending a surge of cold water gushing over the side of the bowl to soak Lavinia’s skirts. Despite her best efforts to impose her will over the unruly liquid, it continued to ripple and refused to come back into focus—a clear reflection of Lavinia’s own agitation.

When her third attempt at scrying failed, she snatched up the bowl and tossed its contents toward the roses in her private garden. Maybe the water would do more good for the plants than it had for her. The simple truth was that she would learn nothing until she controlled her emotions, especially her fear.

“Shall I fetch a fresh pitcher of water?”

Lavinia forced a more pleasant expression onto her face before turning to greet Sarra, who hovered a short distance away. The young girl practically vibrated with the need to be of service.

Lord and Lady, had she ever been that earnest and innocent herself? All things considered, it didn’t seem likely.

Injecting a soothing note into her voice, Lavinia shook her head. “No, my child. I will do so myself. The walk will help clear my head.”

Then her smile became more genuine. “Besides, Sarra, I do believe it’s time for your music lesson. Sister Joetta will be waiting for you.”

Sarra’s face lit up as she bolted toward the door that led back inside the abbey. Halfway there, she froze and slowly turned back, her eyes wide with chagrin. “I’m sorry, my lady. I forgot.”

Then she dropped into a low curtsy with her eyes trained on the floor. “May I be excused?”

Lavinia crossed to where the girl remained frozen in position. She gently raised Sarra’s face and then smiled at her with a wink. “All these rules take a while to master, don’t they? Go seek out Sister Joetta. Tell her you don’t need to report back to me until this afternoon.”

Sarra immediately straightened up and surprised Lavinia with a quick hug before continuing on her headlong charge toward the door. “Don’t worry, my lady; I’ll do my best for Sister Joetta.”

“I know you will, little one.”

Alone finally, Lavinia sank down on the bench and rested her eyes. She’d been up since before dawn, searching for answers among the forbidden texts. All that her efforts had garnered her were a headache and more questions with no answers.

She’d hoped scrying would prove more useful, but it had failed her as well. Perhaps that walk she’d mentioned to young Sarra would actually help. As much as Lavinia loved the sanctuary of her private garden, sometimes the high walls closed in on her.

She glanced up at the narrow slice of blue sky overhead. How long had it been since she’d last ventured beyond the abbey’s thick walls and out into the real world?