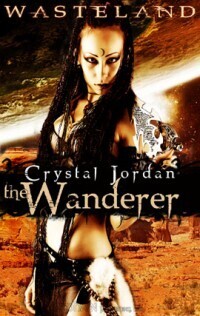 Love is the most dangerous experiment of all.

There is only one rule in the Wasteland: survive.

The few remaining women are as reviled as they are worshipped, a commodity any man must pay to touch. And to touch a Wanderer, he may pay with his life.

For Ezra, the risk is worth the reward. People speak his name with the same reverent terror reserved for ancient wrathful gods, but he must always be ready to fend off those who would take what’s his. And what he wants to be his is Kadira.

Kadira, adopted after she witnessed the slaughter of her devoted parents, has vowed never to love or need anyone. It seems only fitting that she, an outsider, accept Ezra’s demand in trade for the fuel technology her clan needs — but her deep, unexpected need for him is the torture she’s fought all her life to avoid. Worse, the greater her wrath, the more he seems to like it.

Ezra’s mercenary half delights at having the warrior woman in his arms. His scientist half can’t resist the urge to see what makes her react — and what makes her explode.

The real experiment : if the bond they forge is strong enough to make her want to stay.