Whill of Agora, Tome 3 : A Song of Swords 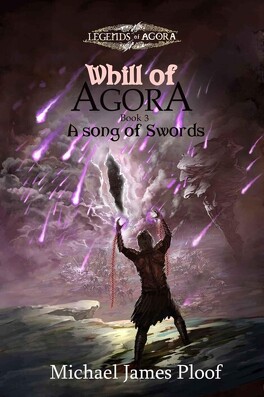 "Michael Ploof is one of the indie good guys. Don't be surprised if he is soon swooped up by one publisher or another. Whill of Agora is a fine example of why I think so." - Award Winning Fantasy Author, M. R. Mathias

Influenced by the works of Robert Jordan, George R.R. Martin, R. A.Salvator and Tolkien, Whill of Agora is a classic coming of age fantasy tale of magic, mayhem, friendship and war. Set in the realm of Agora during the Draggard Wars, five centuries after the fall of the elven lands, Whill of Agora brings readers on a heart pounding epic adventure with a colorful cast of characters that are sure to become fan favorites.

Upon the frozen fields of Volnoss a strange rift has appeared. Eadon's legions have gathered; the final invasion of Agora draws near.

Bound by his vow of fealty, Dirk Blackthorn finds himself at Eadon's side. His first mission; kill the entire royal family of Eldalon, leave none of Whill's kin alive.

Deep within the heart of the Mountains Ro'Sar, King Roakore prepares to travel to Elladrindellia and reunite the boy Tarren with Whill. He hopes also to have the ancient dwarven tome, The Book of Ky'Dren, translated. And he trusts none but Whill to do it.

Aurora prepares to face the self-proclaimed Chief of the Seven, Icethorn of Dragon Tribe. She no longer feels Eadon's power coursing through her; she begins to dare hope that she is free of the dark elf. But a pledge of fealty to Eadon is not made lightly.

Avriel remains trapped within the body of the white dragon. Neither the elder elves nor Whill with his great power can find a way to return her to her body. With the racial memories of her dragon line clear in her mind, she begins to lose hold of her elven self.

Whill has found the ancient elven blade of legend, Adromida. Finally he has made it to Elladrindellia, and his training with the elves has begun. Although he is safe for the time being from the reach of Eadon, a new threat arises that may prove his greatest challenge yet. He soon realizes that his greatest enemy may not be the dark elf lord, but he himself.

Whill of Agora, Tome 3 : A Song of Swords