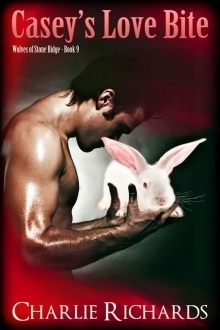 Caspian Carpathian is a nearly two centuries old vampire. He's learned to control not only his blood-lust, but his emotions as well. That's how he became the perfect diplomat for the Vampire Council. In an attempt to warn the vampire ahead of time, Caspian is sent to Stone Ridge to learn about the scientists threatening shifters. He's not prepared to come face to face with his beloved. After a rocky start, he discovers that Casey, a small, bunny shifter, fears him and his teeth. Now Caspian has to use every ounce of restraint he can manage and every seductive tactic in his arsenal to win the trust of the one man that completes him.