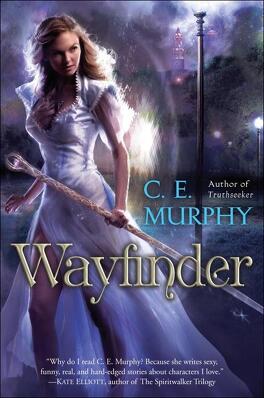 Lara Jansen is a truthseeker, gifted — or cursed — with the magical ability to tell honesty from lies. Once she was a tailor in Boston, but now she has crossed from Earth to the Barrow-lands, a Faerie world embroiled in a bloody civil war between Seelie and Unseelie. Armed with an enchanted and malevolent staff which seeks to bend her to its dark will, and thrust into a deadly realm where it’s hard to distinguish friend from foe, Lara is sure of one thing: her love for Dafydd ap Caerwyn, the Faerie prince who sought her help in solving a royal murder and dousing the flames of war before they consumed the Barrow-lands.

But now Dafydd is missing, perhaps dead, and the Barrow-lands are closer than ever to a final conflagration. Lara has no other choice: she must harness the potent but perilous magic of the staff and her own truthseeking talents, blazing a path to a long-forgotten truth — a truth with the power to save the Barrow-lands or destroy them.

The part of her that had become bold in the past few weeks felt the impulse to stand her ground, to see if the Seelie king would swerve at the last moment. Pragmaticism prevailed, though, and she ducked to the side, trusting Emyr's guards not to trample her. They scattered, avoiding her andgiving him room to wheel his horse. Dirt flew from beneath its hooves as it charged her a second time. This time the guards scattered to avoid Emyr, and Lara found herself abruptly alone on broken earth, awaiting a fate she had no way to avoid.

Then another rider was between her and the king, so sudden, so close, that a collision between them should be impossible to avoid. Lara caught a glimpse of fresh anger blackening Emyr's face before his horse gathered itself and leapt over the intrusive rider and Lara alike. Not effortlessly: it couldn't be effortlessly, not with the scant feet the beast had to prepare itself, not with the height it had to clear. But to Lara's eye it looked as though Emyr's mount had suddenly, carelessly, decided to ignore gravity, and by so choosing had ceased being in its thrall.

The crash with which it came down on her far side belied their weightlessness. Soft earth gave way, the horse sinking to its ankles. Lara gasped in concern for the animal's well-being, but it barely stumbled as it continued forward, then came around again under Emyr's guidance.

"He'll ride you down." A gauntleted hand thrust itself into Lara's vision, fingers grasping in invitation. Lara heard the truth in the words and seized the offered hand, then shouted with surprise as the rider hauled her bodily upward. She caught a glimpse of white hair, of green eyes, and then she was seated behind the rider and gasping with astonishment. Her savior, Aerin, owed her nothing, much less a life-saving gesture--especially since the last time they'd seen one another, Lara had broken the Seelie woman's elegant nose.

"What audacity is this!" Emyr did ride them down, broadsiding Aerin's horse with his own. Lara shrieked and slammed one arm around Aerin's waist, holding on desperately while trying not to drop the staff. She had been horseback a countable number of times in her life. A second impact would dislodge her.

And Emyr knew it. He pulled his horse around, blade leveled at Lara, though his words were for Aerin. "The mortal is mine!"

"The mortal," Aerin replied with remarkable calm for a woman bellowing to be heard over the battle, "is our only chance at learning what's happened to your son and heir, my lord."

Dismay turned to a cold weight in Lara's stomach, beating back the heat of the day. Her whole purpose in returning to the Barrow-lands was to make certain of Dafydd's safety. She hadn't even considered the possibility that something had gone wrong with the magic meant to bring him home, though the worldwalking spell had certainly fought against her return. "Dafydd didn't make it back?"

Aerin half-turned in the saddle, giving Lara a cool look for all that she was little more than a helmeted profile. "Dafydd ap Caerwyn disappeared on the battlefield this half-year ago, moments before you joined forces with the Unseelie heir."

"Joi--" Lara thunked her head forward, not caring that it met Aerin's cold silver armor. "You mean before he seized me. Or kidnapped me, more accurately. Not that it was actually Ioan..." She trailed off as the difficulty of explaining her adventures washed over her.

"Half a year," she said much more quietly. She had been torn from her own timeline when she'd traveled from the Barrow-lands back to Earth, but h...