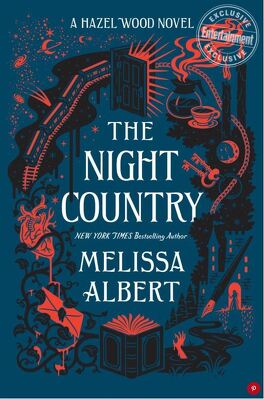 I was eighteen years old, give or take a fairy-tale century, when I had my first kiss.

I was in my senior year at a school in Brooklyn, where I’d enrolled not long after two twisted-up years in the Hinterland. I craved normal, I craved routine. I had, to be honest, this image of myself wearing a leaf-colored sweater and studying in a wood-paneled library, which was embarrassing to think about later, when I was reading The Heart Is a Lonely Hunter under our underfunded high school’s flickering fluorescents. The only thing that made it all bearable was Sophia Snow.

Maybe bearable wasn’t the right word. She was the only thing that made it interesting. Unsettling was another way to put it.

Sophia was an ex-Story like me, another Hinterland reject. Blue eyes and a knotty ballerina build and black hair that moved against itself like water weeds. She had one of those hologram faces, different from every angle, the kind you want to stare at till you’ve uncovered all its secrets. And by the time you’ve figured out you never will, she’s stolen your wallet out of your pocket and your watch off your wrist.

Boys liked Sophia. Girls did, too, but it was the boys she’d meet out, on crappy non-dates that mainly involved drinking and walking around. For a while I’d let her drag me along, because there was a period when I felt like nothing that was of Earth could hurt me. It made me brave, but it also meant I was just a couple clicks shy of feeling numb, inhuman, and I wanted to fight that feeling away.

There was this night when we were down by the water. Across the way we could see the geometric glitter of the Financial District, and I was staring at all the little pinprick windows, reminding myself that every light might have a person under it, and every person had a story, and the city was full of people whose lives were nothing like mine. It was supposed to make me feel less alone, I guess, but instead I was thinking to myself that none of those people, not one, could understand what I was, or what I’d seen, or where I came from. The only ones who could, Sophia among them, were broken. Some of them had broken like glass, sharp and glittering, but some had cracked into dusty pieces that the city swept up and away. I was a little bit drunk on warm spiked Coke, wondering which kind I’d turn out to be, and feeling so sorry for myself I should’ve been ashamed.

One of Sophia’s boys—there were three of them that night, two she might’ve liked plus a hanger-on—sat down next to me. He was one of the main ones, decently hot, with two lines shaved through his eyebrow. That meant something, I thought, but I could never remember what.

We sat for a minute in silence, but that couldn’t last.

“You know, I watch you sometimes.”

That didn’t deserve a response, so I said nothing.

“You’re quiet, but I like that. You’ve got a lot of soul, right?” He smiled at himself as he said it, in that way guys say those fake-sensitive things they think will make a girl’s clothes come flying off. Just because I hadn’t been kissed yet didn’t mean I hadn’t heard some lines.

“What makes you think that?”

“You’re so little,” he said cryptically. He’d clearly come to the end of his material. “But I can just tell, you’ve really got a lot of soul.”

“To be honest, I don’t know if I’ve even got a soul.” I said it to the skyline. “If a soul is what makes you human, then I probably don’t. Unless a soul is something you can grow, like, after the fact. And I don’t think it is. So. No soul. Just to explain why your pickup line’s not working on me.”

It was the truest thing I’d said to anybody in a long time, and the most I’d said all night. I thought he might stand up and walk away, or get confused and call me a bitch. Instead, he smiled.

“God, you are so fuckin’ weird,” he said. Then he kissed me.

It wasn’t that simple. First I stiffened, then I ducked my head and turned away. Finally I scrambled back and tried to stand, because he wasn’t taking my high-beam hint.

“Hold on, hold on,” he said, laughing. He put an arm around my shoulders, and he was so strong, he made holding me in place feel casual. I wasn’t scared exactly, but I couldn’t get away from him, either. His mouth tasted like Coke and garlic, and it was gummy with dead skin.

The part of me that could have killed him for this, once upon a time, fizzed dryly in my chest. The Hinterland in me: it had dried up and drained, it was nearly gone. Maybe it lived where my soul would’ve lodged, if I’d been truly human. Now I wasn’t either, exactly—Hinterland, human—and the way his face was shoved against mine made it hard to breathe.

Then all at once I was panting, and he was screaming, and the places where his skin had mashed against mine were damp with cooling sweat. It took a scrambled second to make sense of what I was seeing: Sophia had dragged him off me by his hair, then thrown him to the ground. She kicked him twice, efficient and well-placed, while his friends yelled Oh, shit! and did nothing to help him. The whole time she kept a lit cigarette in her mouth, like dealing with him wasn’t worth the cost of throwing it away.

Finally she pressed a dirty Ked to his neck. She must’ve been pressing down pretty hard, because he was rasping out all sorts of stuff but you couldn’t really hear it. When he tried to pull her down by the leg, she stepped back and kicked him again, then leaned far over to look into his face.

“You’re gonna die before you’re thirty,” she said, blowing smoke into his eyes. She didn’t say it meanly, just matter of fact. “In an accident. Quick, at least. If that makes it better.”

His friends were helping him up by then, calling Sophia crazy and worse, but taking care not to get too close to her.

“What?” the boy kept saying, his face stained with fear. “What are you talking about? Why would you say that to me?”

She didn’t answer, just watched them scramble and take off, yelling ugly stuff over their shoulders.

When they were gone, she turned to me.

“Was that asshole your first kiss?”

Maybe. Kind of. At least in this version of my life. It was too much to get into, so I just nodded.

She kneeled next to me, put her hands on my shoulders, and pressed her mouth to mine. It tasted like smoke and sugar, and under it a tickling electric-green current that must’ve been the last trace of the Hinterland, or whatever magic it was that allowed her, still, to look at people and know things she shouldn’t know. Like when and how they were going to die.

“There,” she said, pulling back. “Forget that boy. That was your first kiss.”

That’s what I like to think of when I think of Sophia Snow. That small, sympathetic proof that not everything the Hinterlanders did was meant to cause damage. But they didn’t belong in this world, and that was the truth. The cracks they made were small, but small cracks can bring a city down.

And if they didn’t belong here, I didn’t either. We were predators set loose in a world not made to withstand us. Until the summer we became prey.