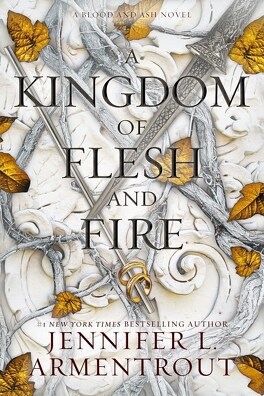 From blood and ash, Tome 2 : A Kingdom of flesh and fire

I shot to my feet. “Let me make one thing clear. I don’t know if you realize this or not, Casteel, but I’m not duty-bound to obey a single thing you say.” Casteel stiffened. “And maybe you should actually look at me when you try to order me to do things,” I tacked on. He turned to me, his head cocked.

“But are you listening?”

“Oh, man,” Delano murmured under his breath as the rest of the room went dead silent. “Someone is getting stabbed again.” Someone, I think it was Jasper, snorted.

“Oh, I’m listening,” Casteel replied. “Maybe you should try that. Along with this thing called common sense.”

“Definitely getting stabbed,” Kieran confirmed. I stepped around the table, aware that Delano appeared to be sinking into his chair.

“Are you armed?” Casteel asked with a smirk. “You are, aren’t you?”

“I’m so confused by what is happening here,” Nova whispered with a slight frown.

“Apparently, she already stabbed him once,” Jasper informed the Guardian. “In the heart.” Nova looked at me.

“And she cut me earlier tonight. Threw a knife right at my face another time,” Casteel ticked off his fingers. “Then this one time, in the woods, she—”

“No one wants to hear about how many times I’ve made you bleed,” I snapped.

“I do,” Jasper remarked.

"Some say all great love stories are."

"Only on once condition," I said.

"You have a condition now?"

I nodded, my heart thundering. "I don't want to pretend," I whispered. "Im Poppy and you're Casteel, and this is real."

"You can't spell dysfunctional without fun, now can you?"

We were only pretending... But this felt so very real.

"The world, no matter how big, is often smaller than we realize."

He was both the vilain and the hero, the monster and the monster-slayer.

"You probably think that was excessive," he said, dropping the crumpled, blood-stained napkin onto his plate. "It wasn't. No one speaks of you or to you like that and lives."

Spoiler(cliquez pour révéler) He moved then, rising so he was on one knee before me. My heart hadn’t stopped racing and swelling from the moment we started to really talk. But now, it beat so fast, I didn’t know how I didn’t pass out. He took my hand, and I wondered if he could feel it trembling. He could. Casteel folded both hands around mine, steadying my hand. “Penellaphe Balfour?” He stared up at me, and there was no teasing glint to his eyes, no smirk to his lips. No mask. Just him. Casteel Hawkethrone Da’Neer. “Will you do me the honor of allowing me to one day become worthy of you? Will you marry me? Today?” “Yes. I will give you the honor of becoming my husband, because you’re already worthy of me.” Casteel’s eyes closed as he shuddered. “I will marry you.” I dipped down, kissing his forehead. “Today.”

Having fear wasn't a weakness. Only the foolish and the false claimed to feel no fear.