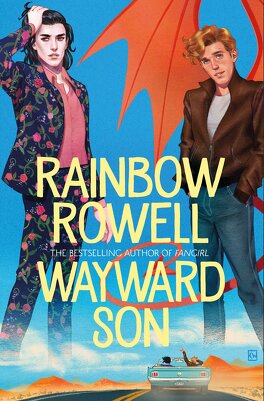 He frowns. “Why’s it called that—does it taste like lavender?”

Penny’s grimacing at Baz. “For heaven’s snakes, Basil, I can’t believe you know what unicorns taste like.”

“Shut up, Bunce, it was sustainably farmed.”

“They’re only capable of small talk; it’s not like eating a dolphin.”

Baz takes my Frappuccino and sucks down a huge gulp. “Disgusting.” He hands it back to me. “Not like a unicorn at all.”

“Simon Snow, it hurts to look at you when you’re this happy.

And it hurts to look at you when you’re depressed.

There’s no safe time for me to see you, nothing about you that doesn’t tear my heart from my chest and leave it breakable outside my body.”

“Something is very wrong with Bunce. She's collapsed in the back seat like a dead rabbit. But I can't really focus on it because of the sun and also the wind and because I'm very busy making a list.

3. Penelope Bunce, when she hasn't got a plan.

6. The band, America. Which I didn't know about an hour ago.

8. Kansas, the state. Which isn't that far from Illinois, so it must be wretched.

9. The State of Illinois, for fucking certain.

16. The words "road" and "trip" when said together with any enthusiasm.

18. Being a vampire in a fucking convertible.

19. A deliriously thirsty vampire in a convertible at midday. In Illinois, which is apparently the brightest place on the planet.

20. The sun. Which hangs miles closer to Minooka, Illinois, than it does over London blessed England.

23. The fucking sun! We get it - you're very fucking bright!

24. Penelope Bunce, who came up with this idea. An idea not accompanied by a plan. Because all she cared about was seeing her rubbish boyfriend, who clearly cocked it all up. Which we all should have expected from someone from Illinois, land of the damned - a place that manages to be both hot and humid at the same time. You might well expect hell to be hot, but you don't expect it to also be humid. That's what makes it hell, the surprise twist! The devil is clever!”

Can you what, Simon? Kiss me? Kill me? Break my heart?

I touch him like he’s made of butterfly wings.

“You don’t have to ask.” I say it loud enough that he’ll hear me, over everything.”

“If you can't trust people with nose rings to be open-minded, who's left?”

“But it was a mistake thinking of that as an end. There is no end. Bad things happen, and then they stop, but they keep on wreaking havoc inside of people.”