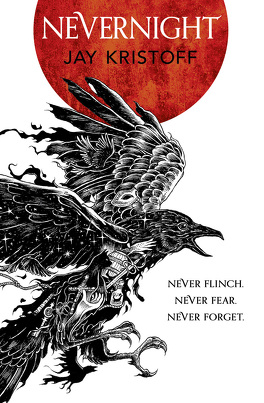 The books we love, they love us back. And just as we mark our places in the pages, those pages leave their marks on us. I can see it in you, sure as I see it in me. You're a daughter of the words. A girl with a story to tell.”

A pause, filled with whispering wind.

When all is bood, blood is all.

If you can’t hurt the ones who hurt you, sometimes hurting anyone will do.

Beauty you're born with, but brains you earn.

“You’ll be a rumor. A whisper. The thought that wakes the bastards of this world sweating in the nevernight. The last thing you will ever be in this world, girl, is someone’s hero.”

Mercurio handed back the blade.

“But you will be a girl heroes fear.”

Too many books. Too few centuries.

In fact, there were three languages spoken beneath the suns that Chronicler

Aelius had no knowledge of.

The first, a tongue spoken by a mountain clan in the Eastern Divide who'd never had contact with outsiders that didn't end in a spit roast.

The second, a peculiar dialect of old Liisian, spoken exclusively by an apocalypse cult in Elai known as the Waiting Ones (their congregation numbered exactly six, one of whom was a dog named Rolf but who was referred to by his fellows as 'the Yellow Prince).

And last, the language of cats. O, yes, cats speak, gentlefriend, doubt it not if you own more than one and can't see them at this particular moment, chances are they're off in a corner somewhere lamenting the fact that their owner seems to spend all their time reading silly books rather than paying them the attention they so richly deserve.

Mia stepped inside, and for the third time that turn, felt her lungs bid her breath farewell. She stood on a mezzanine overlooking a dark wood -a forest of ornate shelves, laid out like a garden maze. And on each shelf stood books. Piles of books. Mountains of books. Oceans and oceans of books. Books of stained vellum and fresh parchment. Books bound in leather and wood and leaves, locked books and dust books, books as thick as her waist and as tiny as her fist.

"Naev, dont let me down there," she breathed.