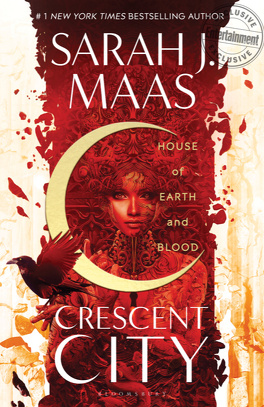 « Bryce’s face crumpled as she lurched to her feet, sprinting to the Gate.

She didn’t care how it was possible as Danika said again, “Light it up.”

Bryce slammed her palm onto the bronze disk of the Gate.

Stunned silence filled the conference room as Bryce plunged into her power.

Declan Emmett didn’t look up from the feeds he monitored, his heart thundering.

“It’s not possible,” the Autumn King said. Declan was inclined to agree.

Sabine Fendyr murmured, “Danika had a small kernel of energy left, the Under-King said. A bit of self that remained.”

“Can a dead soul even serve as an Anchor?” Queen Hypaxia asked.

“No,” Jesiba replied, with all the finality of the Under-King’s emissary. “No, it can’t. »

The Archangel looked at Isaiah, then Hunt. Then her. Micah’s gaze roved over her body. Her face. She knew that gaze, that slow study.

Too fucking bad that Micah was about as warm as a fish at the bottom of a mountain lake.

Too fucking bad he often worked with her father on city matters, and on House business—too bad he reminded her of her father.

She said to Micah, “It was nice to see you again, Your Grace.” Then the elevator doors opened, as if some god had willed them to make a good exit. She nudged Hunt inside, and was following him in when a cold, strong hand gripped her elbow. She batted her eyelashes up at Micah as he stopped her between the elevator doors. Hunt didn’t seem to be breathing. As if he were waiting for the Governor to rescind his deal. But Micah purred, “I would like to take you to dinner, Bryce Quinlan.” She pulled out of his grip, joining Hunt in the elevator. And as the doors closed, she looked the Archangel of Valbara full in the face. “Not interested,” she said.

What blinds an Oracle?

What sort of cat visits an Oracle?

"Through love, all is possible."

She wondered what would have happened if Juniper, on a whim, hadn’t called just to check in that night. Right as Bryce had braced her hands on the rail. Only that friendly voice on the other end of the line kept Bryce from walking right off the roof. Juniper had kept Bryce on the phone—babbling about nothing. Right until her cab had pulled up in front of the apartment. Juniper refused to hang up until she was on the roof with Bryce, laughing it off. She’d only known where to find her because Bryce had mumbled something about sitting there. And perhaps she’d rushed over because of how hollow Bryce’s voice had been when she’d said it. Juniper had stayed to burn the copies of the song, then gone downstairs to the apartment, where they’d watched TV in bed until they fell asleep. Bryce had risen at one point to turn off the TV and use the bathroom; when she’d come back, Juniper had been awake, waiting. Her friend didn’t leave her side for three days. They’d never spoken of it. But Bryce wondered if Juniper had later told Fury how close it had been, how hard she’d worked to keep that phone call going while she raced over without alerting Bryce, sensing that something was wrong-wrong-wrong. Bryce didn’t like to think about that winter. That night. But she would never stop being grateful for Juniper for that sense—that love that had kept her from making such a terrible, stupid mistake.

She gulped, scanning him from head to toe. “About what?” “About what the fuck this is?” He extended his hand. Opened up his big fist. A purple glittery unicorn lay in it. She snatched the toy from his hand. His dark eyes lit with amusement as Bryce demanded, “Why are you snooping through my things?” “Why do you have a box of unicorns in your linen closet?” “This one is a unicorn-pegasus.” She stroked the lilac mane. “Jelly Jubilee.” He just stared at her. Bryce shoved past him into the hall, where the linen closet door was still ajar, her box of toys now on one of the lower shelves. Hunt followed a step behind. Still shirtless. “The soap is right there,” she said, pointing to the stack directly at his eye level. “And yet you took down a box from the highest shelf?” She could have sworn color stained his cheeks. “I saw purple glitter.” She blinked at him. “You thought it was a sex toy, didn’t you?” He said nothing. “You think I keep my vibrator in my linen closet?” He crossed his arms. “What I want to know is why you have a box of these things.” “Because I love them.” She gently set Jelly Jubilee in the box, but pulled out an orange-and-yellow toy. “This is my pegasus, Peaches and Dreams.” “You’re twenty-five years old.” “And? They’re sparkly and squishy.” She gave P&D a little squeeze, then put her back in the box and pulled out the third one, a slender-legged unicorn with a mint-green coat and rose-colored mane. “And this is Princess Creampuff.” She almost laughed at the juxtaposition as she held up the sparkly toy in front of the Umbra Mortis.

“This is already a nightmare.” Isaiah coughed. “You watched Quinlan for one night.” “Ten hours, to be exact. Right until her pet chimera just appeared next to me at dawn, bit me in the ass for looking like I was dozing off, and then vanished again—right back into the apartment. Just as Quinlan came out of her bedroom and opened the curtains to see me grabbing my own ass like a fucking idiot. Do you know how sharp a chimera’s teeth are?” “No.” Hunt could have sworn he heard a smile in Isaiah’s voice.

''Bryce, sweetheart, just get back to your apartment and give me an hour and -''

Huny couldn't stop his own tears then. ''I was waiting for you, too''.

She smiled, even as she sobbed again.

''Please,'' Hunt begged. ''Please Bryce. You have to go now. Before more come through.''

She opened her eyes and go to her feet as true night feel. Faced the Gate halfway down the block. ''I forgive you - for the shit with the synth. For all of it. None of it matters. Not anymore'' She ended the call and leaned Danika's sowrd against the wall of the shelter alcove. Place her phone carefully on the ground next to it.

She ran for the Gate.

She scrubbed down his upper body as best she could. ''I can't clean your wings with you sitting against the wall.''

Hunt rose to his feet in a mighty, graceful push.

She kept her eyes averted from what, exactly, this brought into her direct line of vision. The very considerable something that he didn't seem to notice or care about.

So she wouldn't care about it, either. She stood, water splattering her, and gently turned him. She didn't let herself admire the view from behind, either. The muscles and perfection of him.

Your ass is perfect, he'd said to her.

Likewise, she could now attest

Hunt crossed the distance between them. Took her hands.

"You're my mirror. You said yourself."

Bryce looked at her hands, gripped in his, as she answered, "Yes."