The Alliance of Power Duology, Tome 1 : A Hunter Within 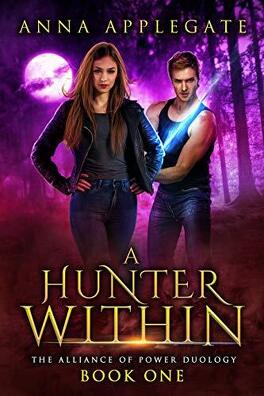 The Alliance of Power Duology (2 livres)

He's the vampire king of the northern territories. She has no idea who she truly is. Together, they'll take on an evil that threatens to destroy them both.

When Research Scientist Jules Parker lands an internship at the most prestigious pharmaceutical company in the country, Falcone Industries, it’s not what she’d hoped. After all, there’s hardly a fine line between taking a volunteer and shackling someone down before injecting poison into their body.

As she attempts to uncover the truth, she finds her own life in danger. Until Seeley Ronan, vampire king, saves her life, introducing a strange and powerful connection between the two of them. He’s sexy, dangerous, and a major distraction...and reveals Falcone is run by rogue hunters who are harming innocent vampires in a quest for power.

Desperate to protect his people, Seeley needs Jules’ help. But that means she’ll have to turn her back on the only path she’s ever known. She’s in way over her head, her world is about to change in a big way, and none of them could possibly be prepared for what comes next.

Fans of Charlaine Harris and Laurell K. Hamilton will sink their teeth into A HUNTER WITHIN, Book 1 in this exciting paranormal romance series by Anna Applegate!

The Alliance of Power Duology, Tome 1 : A Hunter Within

Whoever invented coffee should have won a flipping Nobel Peace Prize. I inhaled the smell of the perfectly mixed mocha latté from the cup which was warming my hands as I sat on a freezing cold bench outside of work. My work. It was the third week of my internship, and I still couldn’t believe I had made it here. I’d busted my butt the last four and a half years of college just to have a chance at this very job—though in reality, I’d worked a lot longer than that toward my goal, but those college years were the ones that really counted—and it had happened.

I took a long swig of my coffee as a cold breeze whipped some hair out from under the comfort of my hat and across my face. I thought my k-cups at home were magical, but they had nothing on this vending-machine-on-steroids stuff Falcone Industries had. I let out an “Mmmm” and immediately looked around to make sure no one had witnessed my embarrassing reaction to a simple cup of coffee. Relieved to find I was still alone, I tucked my hair back into my hat with my free hand and laughed at myself.

I was on my first of two mandatory fifteen-minute breaks, which the company was known to be real sticklers about. I had to completely clear out of my workspace during the allotted break times, which seemed extreme, but apparently too many people got burnt out if they passed up their breaks. At this early stage in my career, I wasn’t going to argue with trivial things like breaks, not when I was on track to accomplish what I’d always wanted.

I was a research scientist. Well, almost. I had this final internship and a few more papers, and then I’d be able to start whatever job I could get upon graduation. My passion had always been in genetic research. I guess it wasn’t really my passion, per se. I had just forced myself to go that route.

Falcone Industries was a leader in the pharmaceutical world, and its headquarters were located within the same town I went to school, which I of course had planned for. I had made it my goal to intern for the number one company in the country, so I could ensure a top-notch job upon graduation, and here I was. I felt like it was the best way to make my parents proud.

I tilted my head back and closed my eyes, letting the sun warm my face through the biting cold air, wondering if they were looking down on me as I prepared to get back to work. It was the dead of winter. The cold had never bothered me as much as it did other people, but I wasn’t immune to the nipping wind that seemed to be picking up.

The knot in my stomach, which was becoming far too familiar, started gnawing at me again as I thought about returning inside, and I tried to push it away. It was getting harder to do so. Every time I savored how far I’d come, I worried things were not what they appeared. For about two weeks now, I’d been uncomfortable and it was increasingly harder to ignore. I thought back to the very first week of my internship and the incident that had caused me to wonder what really went on behind the scenes here at Falcone.

I had been late getting out of my cubicle for lunch and heard some shouting coming from a hallway I hadn’t ventured down before. I had a dangerous sense of curiosity, which led me to see what was going on. I’d made my way down and came across two technicians arguing. One of them held a blood sample and folder in her hands which she’d dramatically waved around as she spoke.

“You know this takes time,” she hissed.

“He’s not giving us anythi—” the male technician was saying but stopped when he saw me.

The female tech looked over her shoulder in my direction and feigned joy. “Ah, finally. An intern who would know what to do, I’m sure.” The male technician she’d been arguing with hung his head.

“I’m sorry to interrupt. I was just on my way to lunch,” I said, backing away.

“Nonsense,” she retorted, halting my retreat. “There’s nothing to interrupt. Can you run an errand for me?” she asked.

“Good. Deliver this sample and the contents of this folder to the third floor on your way to the cafeteria.”

I stood awkwardly for a minute.

“Now, please.” She plastered on what I could only assume was supposed to be a smile before turning on her heel. The man followed her down the hallway, farther away from me.

Surprised to be asked to do something by anyone, I obeyed, rushing to the third floor. I’d never been to the lab before, but I had memorized the layout of the building and carried a map with me that first week just in case I got lost. I pulled it out and found the lab without a problem.

I glanced down at the folder, wondering where this sample was from. I hadn’t yet learned all the trials we were involved in. The folder wasn’t sealed, so I peeked inside as I walked and convinced myself it wouldn’t hurt to read up on some of the active trials Falcone was working on.

My eyes widened as I started reading to myself. Species: Non-human. Day 35 Sample for Patient 624. Male appears to be showing signs of strength. Some disassociation. Run a full work up to see what’s remaining to determine next dosage. I tripped as I tried to process the words that seemed to be jumping off the page at me.

What in the world?