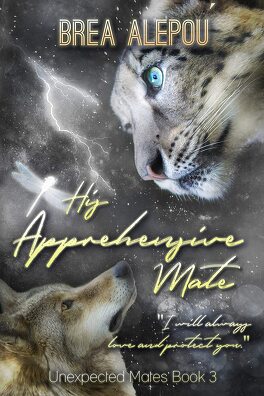 True mates are found in the most unlikely of places.

Wolf shifter Morgan thinks he’s finally found a place to belong: in the arms of his fated mate. But with Morgan’s life endangered by his old pack, he’s not willing to risk his mate’s safety. Even if his very soul cries out for Kenny.

Snow Leopard shifter Kenny always wanted a family of his own. Now that he’s found his fated mate, that dream should come easy, right? Fear is all Morgan has ever known and Kenny wants to shield and protect him from every knowing it again. All he has to do is convince Morgan he can do it.

Family, acceptance, adoption, and healing. Creating a family, one of the greatest treasures of the world.

His Apprehensive mate MM Mpreg shifter romance featuring an overprotective mate, babies, a blue hair teen, love, and happiness. A novel of pure adorable love. In Unexpected Mates series, each book features a new couple but the stories are heavily intertwined. To understand each book they must be read in order.