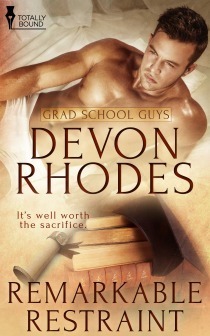 This is book one in the Grad School Guys series.

When Justin gets fed up with his best friend Chaz avoiding him, he decides it’s well worth sacrificing his favorite T-shirt to try to save their relationship.

Chaz is finding it impossible to hide his attraction for his straight roommate, so he tries avoiding Justin until he leaves for the summer. He just has to get through a few more days, then he’ll be home free—at least until Justin comes back in a couple of months. Still, he firmly believes space between them is the best answer for now.

But Justin is not a man to be ignored. He’s known Chaz for almost a decade, and can tell when something is weighing on his mind. And being shut out is not acceptable, especially just when he’s finally ready to commit to more than friendship. When closer than usual proximity just before his trip to Central America turns up the heat between them, he takes matters into his own hands by restraining Chaz’s hands—and feet—until he gets some answers.

The results are explosive and more than either could have dreamt, but the abrupt shift in their relationship is almost impossible to reconcile in the short time they have left together. It will take remarkable restraint from both to find a way to weather the separation, stay friends…and to grow into something more.