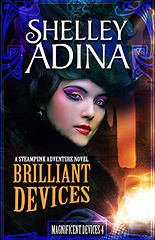 A lady of resources has the power to change the world—if she can stay alive long enough to do it.

Lady Claire Trevelyan had been looking forward to glittering balls, congenial society, and relief from pursuit during her stay with Lord and Lady Dunsmuir in the Canadas. Well, perhaps not entirely. Being pursued by a handsome airship captain is rather diverting, especially when it appears Andrew Malvern is becoming much too distracted by a certain blond mechanic.

But a shot fired in the night puts an end to such diversions, and instead plunges her and her orphaned band of children into a fight for their very survival. Between secret conversations at the highest levels of society and skullduggery in the diamond mines, Claire must discover who is behind a series of alarming attempts on her friends’ lives—before her mother is compelled to make funeral arrangements yet again.

“Great fun, extremely feel-good reads that make you share all of the protagonists’ journeys and victories … an excellent steampunk series.” —Fangs for the Fantasy: The latest in urban fantasy from a social justice perspective

In a tragedy that strikes at the very foundations of society on two continents, one of London's brightest lights and most brilliant minds, Lord James Selwyn, and the leader of modern railroad invention in the Texican Territories, Mr. Stanford Fremont, have both lost their lives in a train wreck on the trackless plains of the Wild West.

Both men were traveling west on the inaugural journey of the Silver Queen, the newest locomotive in a vast railroad empire that stretches from New York in the Fifteen Colonies to San Francisco, the capital of the Royal Kingdom of Spain and the Californias. Accompanying Lord James was his fiancee, Lady Claire Trevelyan.

The journey was to be a showcase for Lord James's latest invention, the showpiece of the newest exhibition at the Crystal Palace, the Selwyn Kinetick Carbonator. The Carbonator had produced enough coal to power the locomotive and several luxury coaches, as befitted Fremont and his titled guests, with only two stops to take on unprocessed coal during the entire journey across the Wild West.

However, on the second day out of Santa Fe, disaster struck. From what the Texican engineers can piece together from the wreckage, the arid atmosphere of the salt flats caused the coal to ignite prematurely and with such vehemence that it caused the tender and boiler to explode. The locomotive was blown off the tracks, and the passenger coaches jumped the rails, resulting in total loss of life.

Funeral services for Lord James Selwyn will be held at St. Paul's on Monday, the second of October, at eleven o'clock in the morning. His Royal Highness the Prince Consort, patron of the Royal Society of Engineers, is expected to address the mourners. Services for Lady Claire Trevelyan will be held privately at the family estate in Cornwall.

This publication humbly extends its condolences to the Selwyn and Trevelyan families, who have been beset with tragedy in recent months. As many readers know, Vivyan Trevelyan, Viscount St. Ives, was killed in a mishap while cleaning his antique pistols. Old Lord Selwyn himself passed away recently. With the death of Lord James, his only son, the baronetcy now passes to a cousin, Peter Livingston, who recently announced his engagement to Miss Emilie Fragonard, of Cadogan Square.