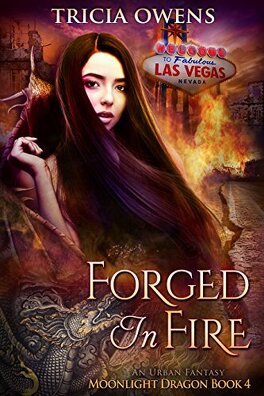 Anne can't even save her reputation. How is she supposed to save the world?

As the most hated magickal being in Las Vegas, Anne is on edge and nervous about what’s on the horizon. Sure, she has her boyfriend Vale by her side along with her quirky friends, but the magickal community is large, and the target on her back is even larger. When she and her friends find a dead shapeshifter in the streets who's carrying a piece of paper with her name on it, she just knows things are about to get hairy…and she’s not wrong.

A gut-wrenching encounter with an exotic animals breeder and a brush with ancient beings from North Africa are only the beginning, for Vagasso and the Oddsmakers are making their biggest move yet: opening the Infernus Rift to allow Hell to take over the Earth. Only Anne and her friends can stop it from happening. But will a dragon be enough? Or have they finally met their match?

When the guy threw the contents of his cup at me, I figured the chances were fair it was either Budweiser or gasoline. Though they tasted pretty much the same in my opinion, only one of them was meant to set me on fire.

If I called up my magickal familiar, a Chinese dragon I named Lucky, then it was bonfire time and I'd be in for a world of hurt. But that was where my attacker went wrong. He'd assumed that my sorcery only came out in the form of a fire-breather.

Shame on him for not thinking outside the box.

I called up Lucky as a blast of wind that slapped all that flying liquid right back in the guy's face. He screamed and two ridged, curving horns burst from his temples. Fortunately, he still had the presence of mind to fling his hands up to cover the horns until he could transform them away.

"A goat shifter," I drawled upon seeing them. "Of course that's what your are."

He blinked madly against the liquid dripping down his face. Since he wasn't screaming in pain, I took it to mean that he'd doused himself in Bud. Still a pretty miserable experience.

"That may be what you tell the ladies, but you and I both know you're just an average goat."

Red-faced, still covering is horn, the guy shoved his way through the crowd, trailing curious looks. Those looks turned to me for an explanation but jus shrugged like I had no idea what had just happened. I wish that were true, but I knew better. I was now Public Enemy Number One amongst the magickal community of Las Vegas. Life from now on was apparently going to suck.