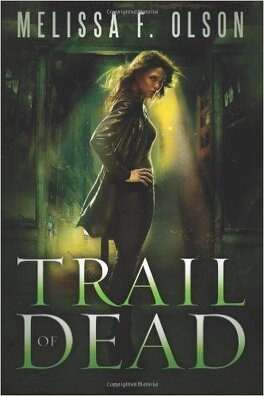 Book 2 of the Scarlett Bernard series

As a null, Scarlett Bernard possesses a rare ability to counteract the supernatural by instantly neutralizing spells and magical forces. For years she has used her gift to scrub crime scenes of any magical traces, helping the powerful paranormal communities of Los Angeles stay hidden. But after LAPD detective Jesse Cruz discovered Scarlett’s secret, he made a bargain with her: solve a particularly grisly murder case, and he would stay silent about the city’s unearthly underworld.

Now two dead witches are found a few days before Christmas, and Scarlett is once again strong-armed into assisting the investigation. She soon finds a connection between the murders and her own former mentor, Olivia, a null who mysteriously turned into a vampire and who harbors her own sinister agenda. Now Scarlett must revisit her painful past to find Olivia—unless the blood-drenched present claims her life first.

The call had come anonymously from one of the witches, not their new leader, Kirsten. That was unusual, which aroused the cleaner’s interest, and on a whim she decided not to call Kirsten herself until she’d arrived at the crime scene.

She followed the directions to a building on Olympic in East LA, a small, dingy theater that had been closed for years. The building exterior—including the weathered For Sale sign out front—was covered in graffiti, and the decorative climbing vines now seemed to be swallowing the structure whole, like a snake devouring a mouse. Squinting against the dim street lighting, she spotted the side door and parked right in front. She pushed aside a stray vine and pulled on the door handle.

It opened straight into the main theater, to an aisle alongside the shabby seating that ran all the way to the stage. The only light came from the few remaining emergency bulbs that lined both aisles. The cleaner immediately saw that witches had been using this building for a while—spell-casting paraphernalia was scattered throughout the seating area. She picked her way past burned-out candles, crumpled paper, pencil nubs, and piles of chalk dust, down the aisle toward the raised stage, which was the darkest area of the room. Squinting against the gloom, the cleaner reached into her large canvas bag and pulled out a heavy-duty flashlight. She switched it on, following the beam up the little set of stairs leading onto the stage itself.

She saw the pentacle right away. One of the witches had spray-painted it directly onto the stage floor, and the white paint looked scuffed and worn around the edges. Whatever they’d been doing here, this wasn’t the first time. The cleaner’s flashlight caught a smear of red, standing out against the white of the pentacle, and she crouched down and touched one gloved finger to the stain. Blood. She followed the direction of the smear a few feet, expecting a body, but instead her flashlight caught a big pile of…something. Dirt? Clay? The pile was the size of a kitchen stove, and as the cleaner stared at it, the dirt…trembled. She gasped, but in surprise rather than fear, and bent closer.

Startled, the cleaner whirled and zigzagged her flashlight beam around the stage, alighting on a pile of ancient books, the tiny corpse of a long-dead dove—and something else. Minding the blood smear, she stepped forward.

“Help me.” The voice was plaintive and forlorn, begging. The flashlight found a pile of charred clothes. The cleaner crossed the stage carefully, keeping on one side of the blood smears, and approached. It took her a long moment to realize that the clothes were moving slightly, and then longer to understand that they weren’t just a pile of burned clothes, but an entire burned person who was still managing to breathe.

She crouched down. The woman—the witch—was small and twisted, her right leg bent in an awkward direction. The cleaner ignored this and played the flashlight around the woman’s exposed skin. What was left of it. A long section of her skin, from chin to hip, was black and flaking. The top part of her face was untouched, and her hazel eyes were fixed on the cleaner, pleading.

“This is third degree, maybe fourth,” the cleaner observed calmly, looking closely at the witch’s stomach. She moved the light back to the woman’s face. “You’re going to die.”

“No,” the woman whispered, tears sliding from the corners of her eyes down into her glossy hair. She spoke without moving her chin, but the cleaner could understand. “You have to help me.”

The cleaner cocked her head back in the direction of the blood smear, toward the pile of dirt. “Is that what I think it is?”

Something new flashed in the burned woman’s eyes. Pride. “Yes.”

“Interesting,” the cleaner said thoughtfully. “A rare specialty. It absorbed most of the impact?”

“You must have been trying for something big.” The cleaner stood up, brushing off her pants. “But you’re still going to die.”

“Where, to the hospital?” The cleaner chuckled down at the desperate woman. “They’ll give you the good drugs, true, but the journey there will be agonizing, and if that’s third degree you shouldn’t be in too much pain right now.” She glanced around. “If you want, I could find something heavy, put you out of your misery…”

She took a few steps back, playing the flashlight beam around the stage. Sometimes the spells required a knife…Before she’d made it more than a few steps, though, she heard the voice whisper at her back. “I have money.”

The cleaner froze and turned slowly back toward the burned witch, raising an eyebrow. “How much money?”

“Old money,” the witch said simply. “And I know a healer. Get me there.”

The cleaner looked at the burned witch for a long moment, weighing her options and enjoying the woman’s panicked stare. Finally, she gave an elegant little shrug. Why not? “Perhaps we can work something out,” Olivia said.