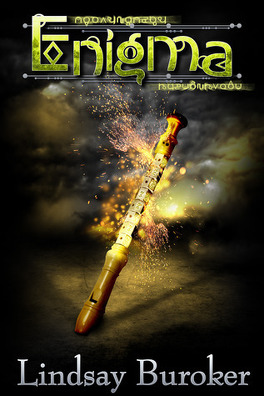 After surviving ancient booby traps, deadly puzzles, and torture-happy imperial marines, cryptanalyst Tikaya Komitopis can’t wait to return home, even if that means explaining to her family how she came to love Fleet Admiral Rias Starcrest, the empire’s most notorious commander and the man responsible for the decimation of her people during the war.

Tikaya and Rias believe they’ll have several calm weeks at sea to mull over the problem of irate citizens and horrified parents, but the ship they board is on the run. The captain has acquired a mysterious stolen artifact… and the owners want it back. When he learns of Tikaya’s background, he urges her to decode its secrets, implying her life—and everyone else’s—might be forfeit if she fails.

Engima is a 15,000-word short story set after the events in Encrypted.